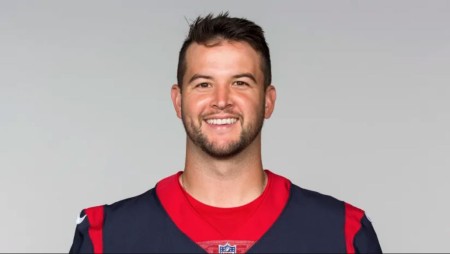 Facts of A J Mccarron

Body and Relation Status of A J Mccarron

American football player, A.J. McCarron is well known for playing as the quarterback for the NFL's football team, Houston Texans. Throughout his professional football career, he received several titles and honors for his notable play. Currently, he maintains a record of 87 passing completions, 137 passing attempts, 63.5 completion percentage, 928 passing yards, and 91.7 passer rating with 6-2 touchdown interceptions.

McCarron was born as Raymond Anthony McCarron Jr. on 13th September 1990 in Mobile, Alabama, United States. He is the son of Dee Dee Bonner (mother), and Tony McCarron (father) and older brother of Corey McCarron. Aside from this, he is a married man. Let's take a glimpse of McCarron's personal life.

American football quarterback, McCarron is committed to a fashion model, Katherine Webb. The duo united as husband and wife on 12th July 2014, at United Methodist Church in Orange Beach, Alabama.

At their wedding ceremony, the bridegroom was perfectly well-dressed, where Katherine wore a white strapless ball gown, and McCarron donned a black tuxedo tying with a black silk tie and a rose on the left side of his pocket.

Check out the video of A. J. McCarron and Katherine Webb's wedding

The pair were surrounded by ten bridesmaids, including Webb's sister, Laurie, and the best man of their wedding was McCarron's brother, Corey. Shortly after their wedding, they held a wedding reception for all of their wedding guests, where they took memorable pictures with them as well.

McCarron and Katherine had their first encounter in 2012, and after having a good conversation, they started dating. At the time of their initial interaction, they had a three-year gap in age, but that wasn't the problem for them.

After dating for overall two years, A. J. gave a mesmerizing surprise to his longtime-partner, Katherine, with an auspicious proposal for marriage while having a candle-light dinner at the Beach Club restaurant in Gulf Shores, Alabama.

During that time, he gifted her with an expensive big diamond ring, which McCarron made it by himself for Webb. With blissful happiness, she approved his proposal and got engaged afterwards on 19th March 2014. Since then, the beautiful pair is spreading joy in their life.

A. J. McCarron and his wife announced that they are going to welcome their first child when Webb was four-month pregnant on 8th December 2015. A year later, Katherine gave birth to their first baby boy, Tripp McCarron, on 24th May 2016. At that time, Katherine was 23 years old.

Two years later, the pair welcomed their second child, Cash Carter McCarron, at 4:57 pm on 18th December 2018. As of now, their second baby boy is one year old. The couple also shares many pictures of their kids while spending quality time with them.

Houston Texans quarterback, McCarron has a whopping net worth of $10 Million as of 2019. He makes impressive earnings from his profession. Back in 2018, he received a paycheque of $5 Million, including $4 Million signing bonus from Oakland Raiders. Similarly, there are some other earnings of McCarron with a total cap hit, listed in the below,

The sports personality, McCarron has total earnings of $10,401,652 from his NFL career. Currently, he is in a $3,000,000 contract with Houston Texans, which consists of a $1.5 Million signing bonus, $2.5 Million total guarantees, and $2.5 Million guaranteed at signing. Likewise, Bradley Roby is also in a two-year contract with Texans.