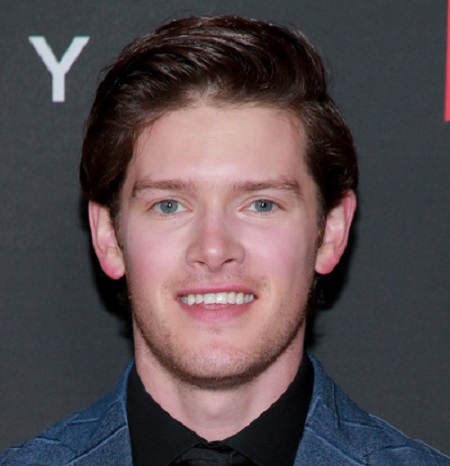 If you are a regular viewer of Netflix's mystery teen drama series The Society? If yes then you might be familiar with the face Alex MacNicoll, who played the main character of Luke. He is an American actor and producer who is also famous for his works such as Transparent (2014), McFarland, USA (2015), 13 Reasons Why (2017), and Last Rampage: The Escape of Gary Tison (2017).

The TV star Alex was born on August 1, 1990, in Hunterdon New Jersey, United States. Born to the American parents, he holds American citizenship and belongs to the white ethnicity. Regarding education, he completed his graduation from DeSales University with a degree in Acting and Direction.

Is Alex MacNicoll Dating Anyone Currently?

The 30 years old Alex is still unmarried and is probably living a single life. At the current time, he has not exposed much about his private life as he is reserved nature. But the fact is that he is regarded as an eligible bachelor who has grabbed the attention of many adults.

Unfortunately, it does not seem that MacNicoll has any romantic relations with ladies at the moment. Therefore, he has no girlfriend and is completely focused on his work rather than being engaged in any kind of love affairs.

On his Instagram account, he frequently posts hanging out and going out on holiday photos with his family, co-stars and friends. He obviously loves to travel to exotic places. He now enjoys his individuality without any dispute.

Alex has been giving appearances on many hits shows and films for more than half-decade. So, he must have gained a whopping amount of fortune from his career as a well-known actor. As of 2020, his net worth is estimated at $500 thousand.

MacNicoll might earn between $50,000 and $60,000, which is an average annual salary as an actor in the United States. Similarly, he makes around $30,000 per episode on the hit Netflix show The Society. Likewise, he debuts his acting career with the TV series, Transparent in 2014.

His highest box office collection movie is The 5th Wave, which was released on January 22, 2016. And the film earned $109 million worldwide against a $54 million budget. His other films credits are McFarland, USA, A.X.L., The Rising Hawk, Anthem of a Teenage Prophet, Vice, Valley Girl, Lost in Darkness, and McFarland.

Apart, Alex is a climate activist and served to promote the initiative #AllEyesOnJuliana. Now, he has more than 200,000 Instagram followers.

Landed The Main Character In Netflix's The Society

Well, the American mystery teen drama web TV series created by Christopher Keyser. It was premiered on May 10, 2019, on Netflix.

And the American actor Alex has joined The Society from the 1st season in 2019. He's playing the main character Luke, the religious boyfriend of Helena, and former quarterback. Helena is played by actress Natasha Liu Bordizzo.

Other stars cast along with him in the drama series include Kathryn Newton as Allie Pressman, Rachel Keller as Cassandra Pressman, Olivia DeJonge as Elle Tomkins, Jacques Colimon as Will LeClair, Gideon Adlon as Becca Gelb, Salena Qureshi as Bean, etc.