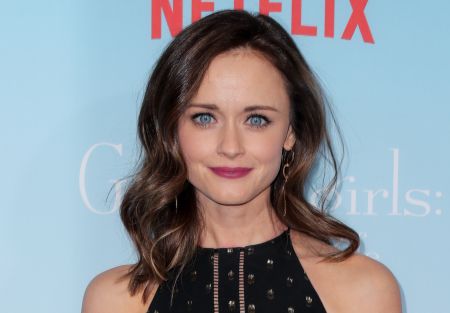 If you have watched the famous American comedy-drama television series, Gilmore Girls then, Alexis Bledel must not be a new name to you. Alexis is a rising American model and actress. She has been in the industry for more than two-decade.

Alexis Bledel was born as Kimberly Alexis Bledel on September 16, 1981, in Houston, Texas. Alexis is among the two children born to Nanette Dozier and her husband, Martin Bledel. Her mother was a gift professor and a flight attendant. She has a younger brother named Eric. Alexis graduated from Catholic St. Agnes Academy in Houston.

Alexis has been married to her longtime boyfriend, Vincent Kartheiser. The love birds had been dating for sometime before walking down the wedding aisle. The duo first met each other at the set of Mad Men. They had a private wedding ceremony in June 2014 in California.

Only a few members from both the families and some close friends attended the ceremony. The pair are said to have met in 2012 when Alexis made a guest appearance on Vincent's series, playing his character's love interest.

While the couple kept their relationship professional and didn't start dating until the series had wrapped, co-stars noted how much chemistry there was between the actors.

The duo opened about their relationship in October 2012, when they stepped out to a photography event together in New York City. Before tying their wedding knot, They were engaged in March 2013. Their engagement ring features a round-cut diamond and is embellished on a flawless platinum band.

In early, 2015 Alexis was out of the media presence. She did not attend any events and public functions. To everyone's surprise, In May 2016, it was revealed that Bledel gave birth to their first child, a son, in the fall of 2015.

Although Bledel lived a happy life with her husband and her child in 2019, she has been involved in some famous relationships before this. Mad Men Actress dated Milo Ventimiglia for more than four years. They started dating from December 2002 until June 2006.

The reason for their separation is not shared with the public. Then in 2010, Some sources claim, Alexis started dating John Paul. However, Non of them has confirmed their relationship.

Alexis Bledel has an estimated net worth of more than $8 Million as of 2020. She has accumulated most of her net worth through her two-decades career of working as a actress in Hollywood. Charlotte Murphy is a English actress with a net worth of $1 Million.

Bledel had a lucrative modeling career before moving to New York. In 2016, she returned to her popular role as Rory Gilmore in a Netflix series called Gilmore Girls: A Year in the Life, which earned her $3 Million.

In 2016, Bledel and her husband, Vincent, sold their Brooklyn Heights penthouse for $1.32 million. The apartment has 18-foot ceilings and a private roof deck made for day-drinking.