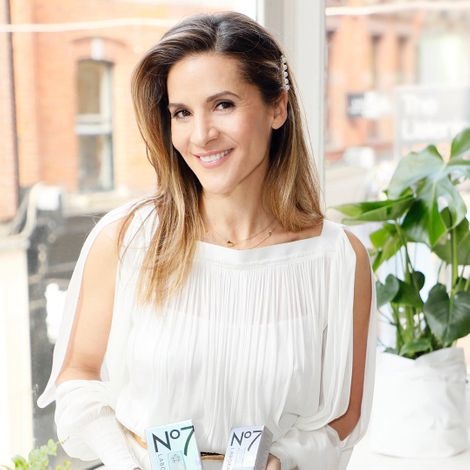 Who is Amanda Byram?

Are you media enthusiastic? Then you might be known with the Irish television presenter and former model, Amanda Byram. Likewise, she is best known for co-presenting BBC One game show Total Wipeout alongside, Richard Hammond.

Amanda Byram was born on 16 June 1973 in Dublin, Ireland. Further, she was born to the father, Denny Byram, and mother, Betty Byram. As of 2019, she is 46 as per her birth date. In addition, Byram has one older sister Natasha Byram who is Model and Actress. As per her citizenship, she is Irish, and ethnicity is not known.

In 2001, Byram initiated her career as a host on The Big Breakfast on Channel 4  and subsequently appeared on Liquid News on BBC Three in 2002 as a guest host. Moreover, she has worked in many TV channels such as Entertainment Tonight, The Big Breakfast, Liquid News, Game Show Network, Something for the Weekend, This Morning, and more. Amanda presented This morning on 31 May 2013 alongside Jake Humphrey.

Who is Amanda Byram's Husband?

The Irish TV reporter, Amanda Byram is a married woman. She tied the wedding knot with her longtime boyfriend, Julian Okines. Well, her partner is a creative content producer.

Byram first met to Julian while shooting at a fitness photoshoot then they started dating in 2014. After dating for several years, the couple got engaged in December 2014. And, Byram and Okines finally walked down the romantic wedding aisle in April 2016 at an intimate ceremony.

Although the couple is already married, they still have no children from their marriage relationship. Now, Amanda shares a happy married life with her life partner with no rumors of divorce and seperation. Besides, she is active on social sites, including Instagram, and often shares beautiful pictures with him.

Well, the gorgeous reporter was in few relationship in the previous time. In 1999, she first dated comedian Patrick Kielty while presenting the Ireland AM morning show. They dated for nearly four years but ended their love life in 2003.

Then in 2008, Byram started to date Australian rugby union player, Craig McMullen.They had dated almost for a three-and-a-half-year and broke up in the year 2012. Moreover, the couple also got engaged in September 2010. Amanda said that the reason for calling off the engagement was long distance.

As we know already, Amanda Byram is known to be a famous Irish television presenter. So without a doubt, she has earned very high and suitable wealth from her journalism career. As of 2019, Byram's net worth is reportedly around $1 Million.

Besides journalism career, Byram has manged some functions such as Crown Talent in England, Octagon Entertainment in the U.S.,1st Opinion Models in Ireland and 6 Degrees Group in Australia.