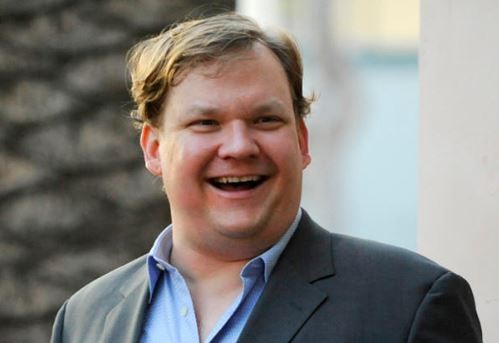 An American writer, comedian, and actor, Andy Richter is also a host of the late-night talk show. His real name is Paul Andrew Richter. Andy Richter was born on October 28, 1966, in Grand Rapids, Michigan, the U.S.

Also, he is popular for his role as the sidekick of Late Night with Conan O'Brien. His funny sense of humor and looks was one of the major feedback for the Conan. So, he was recruited by Conan for the job within weeks of applying.

Married life of Andy Richter. To Whom He Shares his Wedding Vows?

Andy Richter and Sarah Thyre love life start back in 1991. The pair met each other during the production of The Real Live Brady Bunch in Los Angeles. In that drama, Sarah played all the female roles in a different time except Marcia Brady's role while Andy played the role of Mike Brady. That very specific attachment leads them to date each other.

After dating for more than 2 years, the pair share their wedding vows back in 1994 which lead them to share two children. Their son, William Richter is 18 years old and his daughter, Mercy Richter is 13 years old. Furthermore, they have both appeared in the cult comedy series Strangers with Candy where Andy made a frequent cameo appearance and Sarah was the part of the cast.

The pair has also together played Hansel and Gretel in Upright Citizens Brigade sketch comedy series in 1998 on Comedy Central as well as appeared on Late Night with Conan O'Brien show multiple times together.

25 Years The Long Marriage Ended Up

The pair have been married for more than two decades. The happy and blissful relationship ended up in last April. The pair both announced their separation through their personal twitter account. Both have stated that it was a mutual understanding and are happy for one and another.

Though being apart from each other they will remain close friends and will be supporting each other and their 2 fabulous kids. As for now, both are living in Los Angeles but in different places and are still focusing on their specific career and are pampering their children in every possible manner.

Sarah has been one of the major backbones for Andy's career. She has supported her ex-husband, Andy in every possible manner. Popularly known for her character as Coach Cherri Wolf on the television show Strangers with Candy.

Sarah who is an American writer and actress was born on 7th July 1968 and was raised in Kansas City and Louisiana. She was the 2nd child of her parents and has 4 other siblings. Their parents get a divorce while she was so small and struggled with poverty.

One of her siblings is Becky Tyre a well-known actress and writer who married American producer and writer Tony Millionaire back in 1999. Moreover, she has given her voice as Dorothy, Becca in All Hail King Julien and as Mary-Frances Gibbons in The Mighty B! both of them are animated TV series.

The Net Worth of Andy Richter

Andy Richter has an estimated net worth of $15 Million. All of his net worth belongs to his dedication towards his work as a television personality, actor and voice actor. He used to play as a sidekick for the Conan O'Brien all three show Late Night with Conan O'Brien, After Late Night and The Tonight Show with Conan which is a massive hit show on the planet.

From his great work, he used to get a good amount of remuneration without a doubt. His ex-boss Conan has a net worth of  $85 Million and Conan's assistant Sona Movsesian has a net worth of $1 Million. Regarding his career, he has appeared in more than 100 roles which include his starred film and television from 1994 to present date.

His starred movie Penguins of Madagascar earned a total of $373,515,621 worldwide and Madagascar grossed $542,063,846 at the box office. In addition, he holds the record on Celebrity Jeopardy! for the title of the all-time highest one-day score where he won the $68,000 on a first-round game.

Later, he donated all his earnings to the St. Jude Children's Research Hospital. Wow-what a great human. Currently, the funny Richter is busy on his own podcast on the Earwolf network and other projects.

How Rich Is Ex-Wife, Sarah Thyer?

Sarah has an estimated net worth of $3 Million. All of her net worth is earned apart from his ex-husband's net worth. She is one of the experienced actresses in the industry and has been engaged in various characters.

Her starred animated TV series All Hail King Julien and The Might B! had a massive success worldwide from which it is sure she bagged a good amount of remuneration. As for now she is enjoying her single life and is busy in her projects and taking care of her children.

Andy is the third child of his parents, he has 3 other siblings and was raised in Michigan. His father Laurence R. Richter was a professor of Indiana University where he taught Russian for more than 32 years while his mother Glenda Swanson is a kitchen cabinet designer.

In 1984 he graduated from Yorkville High School and was elected for Prom King. At the age of 4, his parents get separated and later found out his father was gay. Moreover, he is of German and Swedish descent.

Dig into Married Celeb for more biography and gossips.