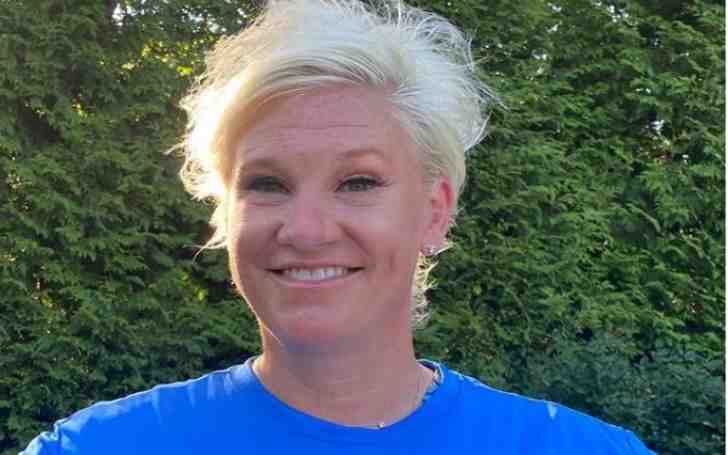 Are you a foodie? What are your favorite dishes? If you are a food lover and fan of Food Network then this next personality is no strange to you. American chef, Anne Burrell is the host of the Food Network show Secrets of a Restaurant Chef. She is also known as the co-host for the Worst Cooks in America.

Anne has been one of the inspiring chefs around the world. Her foods and presentation are admired and loved by many people. Furthermore, she previously worked as an instructor for the Institute of Culinary Education and has been nominated for a Daytime Emmy Award for Outstanding Lifestyle Host.

Yes, the beautiful chef, Anne is engaged to her longtime boyfriend, now, fiance Stuart Claxton. The couple first met on the dating app Bumble back in 2018. Within a first date, the pair got very much attached to one another and started a serious relationship.

They even celebrated Valentine's day together. On that note, Anne uploaded the couple's photo and captioned.

On 21st April 2020, after two years of dating the pair got engaged. Anne publicly announced the engagement through her social media account. She even uploaded her and Stuart photo with a ring in her Instagram account captioning.

A tiny bit of good news in these crazy times.... We are engaged!!!

Anne is a proud chef and has been one of the highlighted chefs not only for her wonderful recipes but also for her relationship. Back in 2012, she confirmed to the New York Post that she was in a relationship with her ex-girlfriend, Koren Grieveson.

Koren is also a renowned chef who has worked in numerous high-profile restaurants like Resto, Blackbird, and Avec. The duo got engaged on 31st December 2012, Burrell publicly announced the news on her Twitter account. However, the pair got separated after a year of engagement and never got married.

Without a doubt, Anne is one of the successful chefs. She has worked in various top-class restaurants around the world. Speaking about her net worth, she has a fortune of $5 Million as of 2020. She has accumulated all of the earnings through her career as a chef and TV personality.