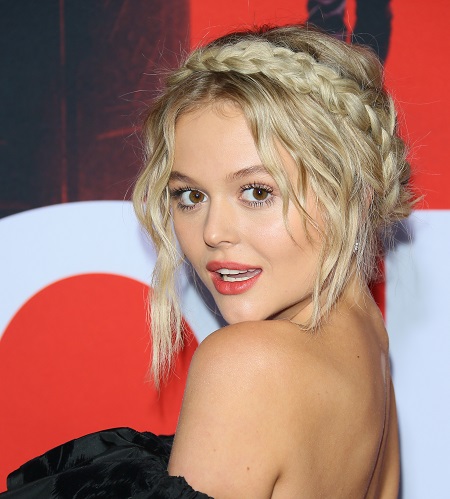 Emily Alyn Lind is an American actress who gained worldwide popularity after starring in ABC series Revenge as Young Amanda Clarke from 2011 to 2015. Furthermore, she is famous for her recurring and main character Ariel on the CBS medical drama Code Black from 2015 until 2018.

She was born on May 6, 2002, in Brooklyn, New York, United States. She is the second-born daughter of Film producer, John Lind, and actress, Barbara Alyn Woods. Her older sister Natalie Alyn Lind, 21, and younger sister Alyvia Alyn Lind, 13, are also actresses. So far, she holds American citizenship and belongs to the white ethnicity.

Well, the answer is no. The beautiful actress Emily, who is 18, is reportedly an unmarried girl. At the current time, she is not romantically linked to any guys. Therefore she probably enjoys her single life without any rumours of dating.

According to the reports, Alyn Lind has been romantically linked to her boyfriend, Kai Caster. He is an actor. They were together until 2016. But further information regarding their love affairs is still unknown to the media.

Two years her senior, Emily probably met Caster on the set of found footage horror film, Mockingbird in 2014. In the film, she played the character of Abby while Kai played Jacob's friend. But now, the couple is no longer together.

Net Worth and Earnings Of Emily Alyn Lind

Working as a well-known actress, Emily Alyn Lind must be accumulating a good amount of money. Well, she is active in the entertainment industry for around 12 years. Thus as of early 2020, her total net worth is assumed to be around $1 Million. While her older sister Natalie holds $3 Million worth now.

According to the sources, the average salary for an actor/actress is $50307 in the United States. Thus for playing various leading and recurring characters in TV shows and movies, she might be receiving around $50307 in a year.

Furthermore, Lind might be earned a payroll of $20,000 per episode for her role in Code Black. Likewise, her depicted 2016's film Lights Out grossed $148 million against a budget of $4.9 million. Her next film J. Edgar made $84 million worldwide in 2011.

Ar age 6, Emily made her film debut by playing the role of Young Lily Owens in The Secret Life of Bees in 2008. Afterwards, she has acted in different films such as Enter the Void, J. Edgar, Movie 43, Hidden, Lights Out, The Babysitter, and Doctor Sleep.

Her post-production film is The Babysitter: Killer Queen. In addition to movies, Alyn Lind has starred in TV shows including Eastwick, All My Children, Revenge, Hawaii Five-0, Criminal Minds, and Rush Hour. Her upcoming television series is Gossip Girl where she will play the main role, Audrey.