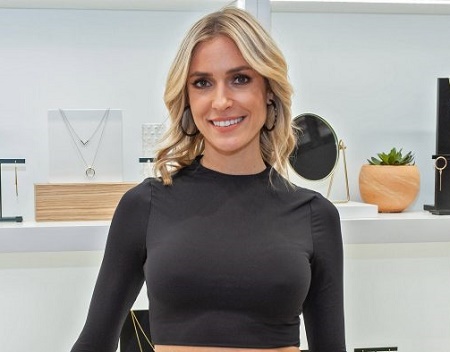 Brittainy Taylor is an American reality TV star who starred in reality television series, Very Cavallari, premiered on E! on July 8, 2018. She currently works as Uncommon James' store manager, and as IT and Operations Head. Also, she's the former UJ Operations Manager.

She was born on January 30, 1989, in Philadelphia, Pennsylvania. Further, she has not revealed a lot of information about her parents, but she still shares pictures on social media with family members. She completed a Bachelor's degree in Public Relations and Advertising from Widener University.

Who is Brittainy Taylor Dating Currently?

The Uncommon James manager already has found a new beau in her life. He is none other than, PJ Kellogg, who serves as a general manager at Nashville's D1 Training and is a former Marine.

As per their social media posts, this new couple is dating eachother since October 2019. At first, Taylor's new lover shared the picture lifting her up at Oktoberfest in Nashville on his Instagram account. He even wrote, "I just HATE having fun with you", where she commented, "Honestly it's getting out of control."

Later, Brittainy made it official by posting her new partner 's photo via Instagram, on 23 December 2019 over Christmas. She wrote the perfect shot, "You make it feel like Christmas.' PJ commented, "Every Christmas I used to get coal," "Finally, I get one."

Since the debut of her their romantic relationship, Taylor and Kellogg have regularly posted their hanging out photos on their respective account. Recently, on 14 February, Taylor shared a beautiful photo of the 1st Valentine celebration on Instagram in which she wore a red gown while PJ wore a Marine dress uniform.

Past Love Affair of Taylor

Now talking about her past relationship, the 31-year-old brunette has dated only one guy in her entire life. She was in a relationship with her ex-boyfriend, Jon Stone, an American country music duo, for four and a half years.

Brittainy had also had a pregnancy scare since breaking up with Jon. She admitted to having had break-up sex with Stone at the time of the pregnancy scare. "Honestly, I 'm getting very worried with all the break-up sex, and I think I'm pregnant," she says on Very Cavallari in a confessional. But, luckily, that was a false alarm.

The music artist actually wanted to tie the knot with Taylor during their love affair but she was never in a rush to become a bride. So this might be the reason behind their separation. Similarly, the 5 feet and 6 inches reality star explained she didn't want to get wedded because she watched her mother go through messy marriages, during season 2.

Following the split, the Some Girl singer said that their split was a surprise to him. He stated on the US: " She’s not over this relationship, there’s no possible way she can be and she tells me that".

How much is Brittainy Taylor's Net Worth?

Working as a store’s manager of Uncommon James, Brittainy Taylor might amassed a good amount of money. As of 2020, she has an estimated net worth of $400 thousand throughout her career as a reality TV star.

This Nashville based show launches the flagship store for Kristin's clothing and jewelry line. It follows Kelly Henderson, Colby Dee Coskery, Wirth Campbell, and others.