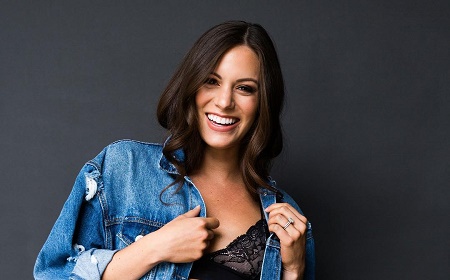 Taylor Monaco is a well known name in the entertainment industry. She is known for starring in American reality television series, Very Cavallari, in 2018. In addition to acting, she has done modeling for Cavallari’s products and Block Agency.

She was born on 13 August 1993 in Honolulu, Hawai, United States. Likewise, her family including her mother, Lea Price, and sister, Emma Price moved to Birmingham, Alabama, when she was young. She is American by citizenship and is of white ethnicity.

Who is Taylor Monaco Married?

Belmont University's graduated, Monaco now shares a happy marital relationship with her long term partner, Michael Monaco. By profession, he is a photographer.

After dating for a couple of years and love romance, they became an engaged couple on 7th March 2018. The news of engagement also aired in Taylor's reality show Really Cavallari. After becoming a fiance, the lovebirds tied the knot on 10 May 2018 at a private function.

Recently on May 11, 2020, the actress wished her husband, Michael, on the occasion of the couple's second year wedding anniversary. She captioned the post: "Happy 2nd year of marriage chicken butt". Additionally, these stunning newlyweds, Instagram pages are full of lovely pictures of each other.

At the moment, the two are very much in love with each other and are enjoying their healthy married life for more than two years. So far, there are no reports about their extra-marital love affairs on the media.

Mother of One Child

The 5 feet 6 inches tall reality TV star, announced her pregnancy news saying that she is expecting a baby girl in April 2018, just after few months of marriage.

The new parents shared the images on the social media pages of their newborn bundle of joy. " My little love. I couldn’t ask for more than everything you have given me these last 2 weeks, Taylor captioned on the post. " My heart is so unbelievably full".

While Mr. Monaco also shared his little girl's amazing holding photographs with the caption: "This is the best thing ever." The couple has just celebrated Rose's 1st birthday in 2019.

The Net Worth of Taylor Monaco

Working as a model and actress, Taylor might have earned a handsome amount of money till the date. As of early May 2020, her net worth is estimated to be around $350,000. Her significant ways of earnings are her professional career as an actor and model.

Likewise, Monaco has appeared in only one television show called Very Cavallari, which was premiered on E! on July 8, 2018. She starred from seasons 1–2 alongside her co-stars including Brittainy Taylor, Shannon Ford, Reagan Agee, Kristin Cavallari, Jay Cutler, and others.

As of 2020, the American Reality TV Show star's average income ranges from $33,500 to $73,475. Thus, Monaco could pay off in about $35,500 for her acting role. She also earns additional sum as a model for Uncommon James and Block Agency, apart from performing gigs.