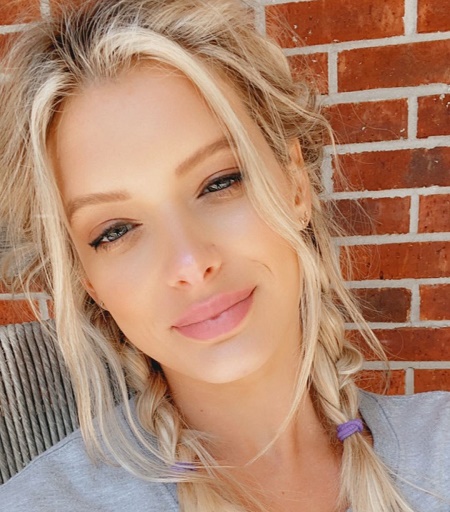 The American Reality star, Reagan Agee rose to prominence after starring on Kristin Cavallari's reality show Very Cavallari, from season 1- 2. Now, she 's working as an assistant at TV personality Cavallari's shop for Uncommon James. Besides this, she used to work as a hair-stylist before that.

She was born on 17 September 1990 in Nashville, Tennessee. Her mother's name is Cynthia Agee and her brother is Matt Agee. She has American citizenship and belongs to white ethnicity. She attended North Alabama University and then completed her graduation in 2009 from Central High School.

The 29 years old star is still an unmarried woman. But, now, she is in a romantic relationship with the man whose name is Tom Boardman.

According to Regan's Instagram post, the two seems to be started dating back in August 2018. Before that, neither of them had photographs together on their account. She first posted the picture on her Instagram account with her new partner Tom sitting on his lap saying " I feel good about it".

Since then, these cute lovebirds regularly post eachother photos on their respective pages, such as on dates, enjoying a vacation in Las Vegas, and wearing matching costumes/outfits. Therefore their love life is blossoming to the fullest.

Before dating her current lover, Boardman, she once had a love affair with football player Taylor Lewan, 29, in around 2015.

Why Reagan Was Fired from Kristin's Show, Very Cavallari?

Well, Very Cavallari is an American reality television show which aired on E! on July 8, 2018. The show followed Kristin and her life in Nashville, Tennessee, along with her ex-husband Jay Cutler, whom she divorced in early 2020.

The actress Agee has also appeared in the program between one and two seasons. But Kristin revealed she had fired Reagan on Very Cavallari's first episode of season 3 in regards to her Uncommon Jones' employee.

However, the mother of three, Cavallari revealed on May 19, 2020, that she would not be continuing her E! series after three seasons."As I start this new chapter in my life, I have decided not to continue with ‘Very Cavallari.’ She captioned on her Instagram post: "I’ve absolutely loved my time filming and am so grateful to E! Entertainment for making this journey possible".

Reagan might make a suitable amount of money from her professional work as a reality TV star. Although her precise net worth is not mentioned anywhere, it is reportdely more than $300 thousand. Her co-stars including Taylor Monaco and Brittainy Taylor also enjoy the same amount of worth.

As of 2020, the average revenue for the American Reality TV Show star ranges from $33,500 to $73,475. So she could pay off in the same range for her appearances in Kristin 's show, Very Cavallari up to season 2. Further, as an assistant at Cavallari 's store, Uncommon James, she also makes a fair amount of money.

Apart from that, she is quite active on social sites including Instagram where she often uploads her daily workout images and videos. Not only this, but she also promotes various brands like Modera Buckhead and Sculpture.