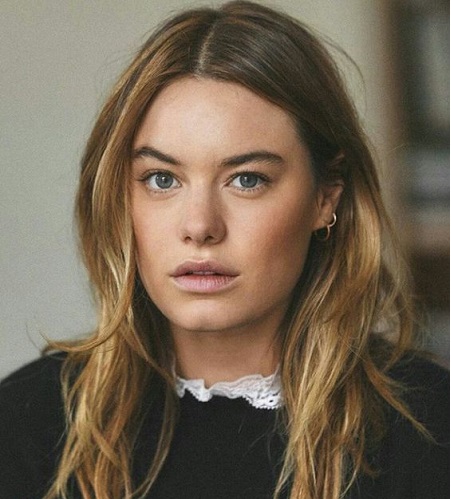 French–American model, Camille Rowe is famous for her presentations in campaigns like Dior, H&M, Chloe, Victoria's Secret, Abercrombie & Fitch, and Gap. Further, she is well known for her modelling cover photoshoot for Vogue Paris, Elle, Marie and Claire.

In 2016, she has made an appearance on the cover of Playboy. Is she dating? If yes, who is her boyfriend? Today let's talk about her personal life in the following sections.

The 1.71 m tall French model Camille Rowe is reported to be a single lady. Henceforth, as of now, she is enjoying her singlehood without any dating rumours.

However, the Runway model, Rowe, whose age is 30, was once in a love relationship with English Singer-songwriter, Harry Styles. They were together from summer 2017 to July 2018. The couple reportedly first introduced through the fellow model, or their mutual friend, Alexa Chung.

During their relationship period, it is reported that Victoria’s Secret model Camille was close to Styles' parents. In January 2018, a source told The Sun that Harry introduced Rowe to his family members and as well as spent New Year's Eve with her in Los Angles.

Camille and Harry's Break Up Cause

After dating for more than a year, things come ended between the pair. Their break up news comes out just two weeks after Harry's tour wrapped up in July 2018.

But both parties have not confirmed an exact reason for the separation. But the pop singer alludes to lying on Rowe in of his new songs, Fallen, a source stated. One of Harry's best friend Tom Hull spoke about their separation saying: “He went through this breakup that had a big impact on him".

What is Camille Rowe's Net Worth?

Camille Rowe is a French–American model who has an estimated net worth of $6 Million as of 2020. She earns money from her modelling and her Instagram account. She started her modelling career in 2008 by becoming the face of French luxury fashion house, Chloe.

Since then, Rowe has done modelling for various fashion brands such as Gap, and Victoria's Secret. Similarly, she has emerged in magazines like Madame Figaro, Marie Claire Italia, Vogue Paris, Elle France, etc.

She moreover starred in the rock band MGMT's "Alien Days" music video. Asides this, she starred as an actor in French film One Day Will Come. Also, she released short drama Butcher Boy with Jack Kilmer.

Camille Rowe was born on 7 January 1990 in Paris, France. Her American born mother Darilyn Rowe-Pourcheresse is a former model and dancer at Le Lido club. While her French-born father René Pourcheresse is a restauranter.

Stay Tuned With Us: MarriedCeleb To Know More About Models