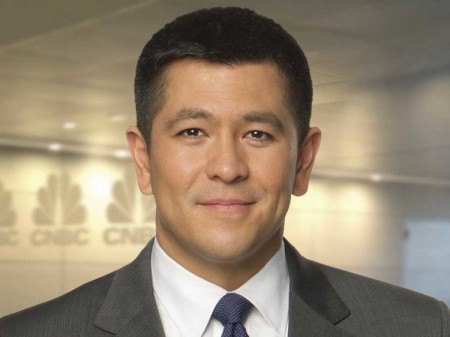 The 49-year-old Carl Quintanilla is an American journalist who is known as an anchor for the shows Squawk on the Street, Squawk Alley, and morning programs on CNBC. He won an Emmy Award, an Edward R. Murrow Award, and a Peabody Award for the coverage of Hurricane Katrina in 2005.

Quintanilla is married to Judy Chung, a former TV producer who works as the senior manager for Calvin Klein. Additionally, Judy also serves as a product/design manager for Ralph Lauren.

Carl Quintanilla is the husband of Judy Chung, a former producer for the CNBC and MSNBC show. The couple exchanged their wedding vows on June 17, 2005, in an intimate wedding ceremony. Carl's wife, Judy, works as a product and design manager for global leading fashion brands.

Carl met his future wife, Judy, on the set of MSNBC Live in June 2004. After nearly one year of dating, the lovebirds married each other and henceforth are separable still. They have been married for over fourteen years as of 2019.

The journalist and the designer are proud parents of two daughters. They welcomed their twins Ava Jane and Lily Anna on June 17, 2009, and their birthdate is coincidentally the same as the marriage date of their parents.

Despite having busy schedules, Quintanilla and Chung manage to raise their kids properly. The family of four are rarely seen outside together, but that doesn't mean they don't give each other time.

The former worker of The Wall Street Journal, Carl Quintanilla, enjoys a net worth of $2.5 million as of 2019. The primary source of his income is the media industry, where he contributes as an anchor. A few of CNBC's journalists who have decent earnings are John Harwood and Melissa Lee.

Now, talking about his salary and incomes, the Emmy award-winning journalist earns $500,000 from his contract with the CNBC's Squawk on the Street broadcast live.

Judy also works as a product/design manager for Ralph Lauren, and the average salary for a design manager is $102,000. Further, she also served as a television producer for the programming broadcast media, MSNBC.

Owner Of A Luxurious House

Carl and his spouse, Judy, bought a beautiful home in 2017, which is located in Bridgehampton, Long Osland, New York. Their 4,200 square foot house cost $3.2 million and consists of seven bedrooms, six and a half bathroom.

Additionally, their luxurious home features a double-height dining hall, glass doors, and curved ceilings. It also has a sizable state-of-the-art chef's kitchen, a naval flair terrace, and a swimming pool with a spa.

In 2005, Carl Quintanilla spent weeks in New Orleans as a part of NBC's team coverage of Hurricane Katrina. For his coverage, Carl shared a national Emmy Award, a DuPont Award, an RTNDA Edward R. Murrow Award, and a Peabody Award.

To be familiar with your favorite media personality, follow marriedceleb.