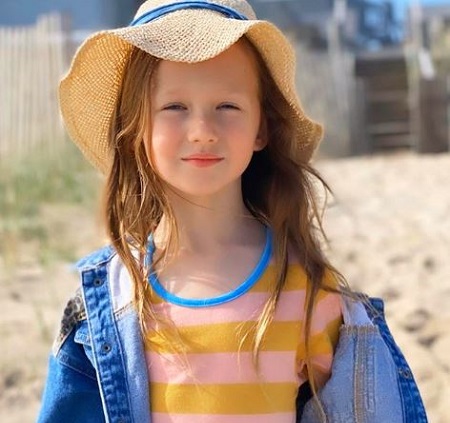 Carmen Gabriela Baldwin is an American celebrity kid who has enjoyed the spotlight ever since her birth. She is known as the firstborn child or single daughter of legendary American actor, Alec Baldwin and his second wife, Hilaria Baldwin, an author.

She was born on Friday, August 23, 2013, in Los Angeles the United States. Her parental grandparents are Carol M. Baldwin (died on 15 April 1983) and Alexander Baldwin, 90. Her uncles are William Baldwin, Daniel Baldwin, and Stephen Baldwin, all actors. Further, she has 16 cousins including Hailey Baldwin, Alaia Baldwin, Kahlea Baldwin, and Jameson Baldwin.

Carmen Gabriela has received all the stuff she had needed as a child being born to well-known parents. As of now, she is still young to date any boys. So, she is enjoying her childhood along with her siblings and parents.

Recently on her 7th birthday, Alec and Hilaria have celebrated her special day by posting beautiful tributes on their IG accounts. Her momma posted the photo of Carmen with a lovely birthday cake with the caption: "Happy 7th birthday to my girl".

Not only this the daddy's little girl Baldwin frequently spotted on the red carpet along with her mom and dad. On October 22, 2018, she attended the Arthur Miller Foundation Honors at City Winery, New York.

Has Three Little Brothers and a Half-Sister

Yes, Carmen is a big sister to three brothers. They are Rafael Thomas Baldwin born on June 17, 2015, Leonardo Ángel Charles Baldwin, born on September 12, 2016, and Romeo Alejandro David Baldwin born on May 17, 2018.

Surprisingly, her next unborn sibling is on the way. Recently on April 7, 2020, her parents, the Extra correspondent, and the Mom Brain podcast announced that they are expecting their number four baby in December 2020.

On the other hand, Ireland Baldwin born on 23 October 1995 is the older half-sister of Carmen from her father's side. The 1.83 m tall Baldwin was married to actress, Kim Basinger, 66 on 19 August 1993 in East Hampton.

They first met on the set of the film The Marrying Man in 1991. But nine years later they ended their marriage on 3 February 2002.

As of now, her mom, Hilaria, 36, and dad, Alec, 62, have been living a happy marital relationship for 12 years. After one year of love romance, they were engaged in April 2012.

Within two months, the yoga teacher and Knots Landing's star exchanged the wedding vows on Saturday, June 30, 2012. Their big day took place at the Basilica of St. Patrick’s Old Cathedral in New York. The ceremony was officiated by Msgr. George T. Deas.

Likewise, the couple who have 26 years age gap first met in February 2011 at New York's restaurant Pure Food and Wine. Despite their age difference, they romantically started dating in Augst 2011. After that, they moved to Greenwich Village from the Upper West Side.

How Rich Is Carmer's Parents, Alec and Hilaria?

When it comes to her mother, Hilaria Baldwin has a whopping net worth of $10 Million as of 2020. She has accumulated her total worth as a yoga instructor and author. She is a founder of a yoga studio named Yoga Vida which has two yoga studios in New York.

On December 27, 2016, Baldwin released the book The Living Clearly Method: 5 Principles for a Fit Body, Healthy Mind & Joyful Life. On the other hand, her dad Alec now enjoys a staggering net value of $60 million. Working in the entertainment industry for four decades, he has amassed a remarkable collection of credits from various TV and movie productions.

Currently, Baldwin makes a salary of about $300 Thousand per episode. Likewise, his biggest role was with 2001's film Pearl Harbor which earned over $450 million worldwide against the budget of $140 million.