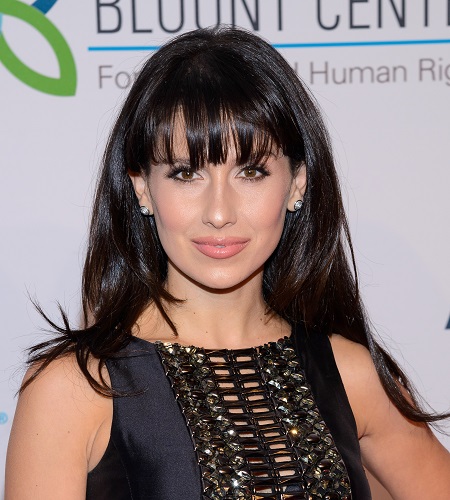 Hilaria Baldwin is an American-Spanish writer, yoga instructor, and businesswoman who is working for podcast Mom Brain as a co-host alongside Daphne Oz. However, she is best known as the current or second wife of American actor, producer, comedian, Alec Baldwin.

Hilaria Thomas was born on 6 January 1984 in Majorca, Spain to the American father and Spanish mother. Thus, she holds dual American-Spanish citizenship and is of mixed ethnicity. She completed her graduation from New York University with a major subject in art history and dance.

When Hilaria and Alec Were Married?

36, Hilaria first met 62 years old Alec in February 2011 at New York's restaurant Pure Food and Wine. While she was standing with her friends near the door then he walked up and took her hand and said, ‘I must know you.

Ms. Thomas replied after which she said they stood chatting and it was love at first sight for Hilaria. Then they continue chatting through phones and finally had their first date at a theater district restaurant. Despite their age difference, they romantically started dating in Augst 2011.

The two moved to Greenwich Village from Upper West Side. After a year in April 2012, the duo became an engaged couple. On Saturday, June 30, 2012, the yoga teacher and Knots Landing's star exchanged the wedding vows at the Basilica of St. Patrick’s Old Cathedral in New York. The ceremony was officiated by Msgr. George T. Deas.

She Is A Step-Mother of Model, Ireland Baldwin

But before Hilaria, the son of Carol Martineau Baldwin and the late Alexander R. Baldwin Jr. was married to actress, Kim Basinger, 66. They first met on the set of the film The Marrying Man in 1991.

They married on 19 August 1993 in East Hampton. But after nine years later they ended their marriage on 3 February 2002. From their nine years of togetherness, they had a daughter Ireland Baldwin, born on 23 October 1995. As of now, Ireland is a famous fashion model and actress.

Yes, the 1.63 m tall writer Hilaria and her husband, Alec are enjoying their parenthood of four little children, one daughter, and three sons. On August 23, 2013, the couple gave birth to their first baby girl, Carmen Gabriela Baldwin.

Yes, Hilaria and Alec's baby number five is on the way. On April 7, 2020, the Mom Brain podcast shared a video of her belly on Instagram with the sound of her baby's heart beating in the background.

She captioned: “Sound up…I’ll let the baby do the talking because I don’t have the words to express how this sound makes us feel". And the baby's due is in September.

Before this, they announced that Hilaria suffered from a miscarriage when she was four months pregnant in November 2019. In April of last year, she also miscarried a baby at four months into her pregnancy.

How much is Hilaria Baldwin worth?

Hilaria Baldwin has a whopping net worth of $10 Million as of 2020. She has accumulated her total worth as a yoga instructor and author. She is a founder of a yoga studio named Yoga Vida which has two yoga studios in New York.

On December 27, 2016, Baldwin released the book The Living Clearly Method: 5 Principles for a Fit Body, Healthy Mind & Joyful Life. Further, she has made apperances in magazines like Yoga Journal, New York Times, Elle. Similarly, she has featured as a fitness expert on TV shows such as TODAY, Katie, The Rachael Ray Show, lives with Kelly and Michael.

On the other hand, her husband, Alec now enjoys a staggering net value of $60 million. Having contributed to the entertainment industry for four decades, he has accumulated a remarkable collection of credits from various TV and film productions.

Currently, Baldwin makes a salary of about $300 Thousand per episode. Likewise, his biggest role was with 2001's film Pearl Harbor which earned over $450 million worldwide against the budget of $140 million.