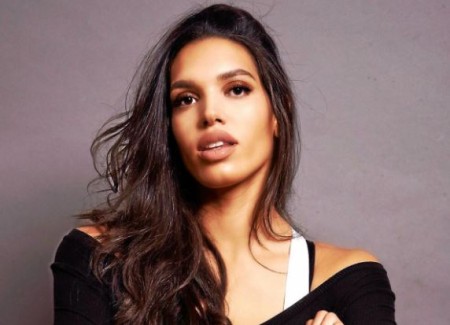 We often have seen a couple who compliment each other on mental, physical and intellectual manner. Having said that Charlise Castro and her husband, George Springer is a perfect example of a match made in heaven. So, who are they? Well, Charlise is a fitness coach and former college softball player. Meanwhile, her husband, Springer, is a professional baseball player and the 2017 MVP star.

Currently, Charlise is an entrepreneur working as a fitness instructor at SWEAT 1000. Her fame gained more exposure after she began dating Springer. The two have been married for over two years. And fans are curious to know more about their personal life. We will uncover some exciting news, so stay tuned!

Charlise and George exchanged their wedding vows on January 20, 2018. Their lavish marriage took place in an outdoor ceremony at The Resort of Pelican Hill in Newport Beach, California.

Talking about the big day, Charlise said that it was the wedding of her dreams. To make the ceremony, beautiful designers bedecked the area with thousands of fragrant ivory florals along with the towering greenery spelling of "C&G."

Charlise wore a fitted gown with a lace overlay along with a cathedral veil, while George looked sharp in a tuxedo jacket made from authentic Royal cloth. For the honeymoon, the couple went to Fiji. As of now, they have been married for over two years, and the pair hasn't welcomed a child still.

Castro had heard of Springer as she played international softball with Springer's sister Nicole for two years. Beginning in 2015, the couple started talking and texting for around six months.

Finally, in December 2016, Springer popped the question while they were on vacation in Mexico writing "Will you marry me?" in the sand. Charlise was excited and gave him an affirmative answer. Several news outlets published the news of their engagement.

Talking about her husband, Charlise once said that her independence attracted him from the beginning. Also, George never misses any chance to compliment on his wife's beauty and intellect.

As a fitness expert and entrepreneur, Charlise earns a decent sum of income. However, there is no exact information about her net worth. Currently, she is a fitness instructor working for SWEAT 1000, a high-intensity fitness concept from South Africa. Some renowned fitness experts like, Melissa Wood and Kristen Crowley has an impressive wealth.

Castro's annual salary is over $58,931, and she earns extra earnings from paid sponsorships and modelling projects. Being the wife of a rich husband, she doesn't have to worry about her bank balance. But Castro is an independent woman and has made a name for herself through hard work.

Charlise is a National Academy of Sports Medicine approved certified personal trainer. Additionally, she has a blog and website called CastroFit.com.

The Houston Astros' outfielder, George Springer has a net worth of $8 million as per celebritynetworth. Some sources has claimed that the MLB player's fortune is no less than $15 million. From 2014-2020, Springer earned over $37 million as total career earnings playing for the Astros.

In 2020, Springer signed a one-year contract worth $21 million with an adjusted salary of $7.77 million. Do you know in 2014, he turned down a reported seven-year contract worth $23 million? Springer has won numerous accolades including the 2017 MVP, MLB All-Star, Silver Slugger Award and World Series Champion.

The 28-year-old, Charlise Castro, was born on May 13, 1992, in Saugerties, New York, the United States. She was born to parents Angel Castro (father) and Janelle Castro (mother). A lovely Latin, Charlise lived in New York until she was 15. Further, she has a brother named Andre.

Charlise attended Kingston High School, where she played softball, volleyball, and basketball. She received the division 1 scholarship from the University Maryland Eastern Shore. After being named the Mid-Eastern Athletic Conference Rookie of the Year, she then transferred to the University of Albany. Like Castro, Jessica Mendoza is also a former softball player.

At Albany, Charlise changed her course of study to major in communications from psychology. Further, she earned her MBA from the College of St. Rose.

In 2012, Castro played for the Puerto Rican national team for the World Cup of Softball. Hence, she has tasted her success in international as well as Olympic tournaments as well. But she retired from softball career and decided to pursue fitness industry.

Charlise is now a wellness educator, strength and conditioning coach. She is one of the lead instructors at SWEAT 1000. In the coming future, Castro might launch her own merchandise.