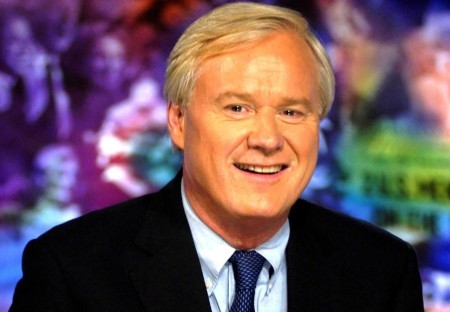 The recipient of several prestigious awards, American analyst, Chris Matthews is known for his political views and condemnation of strategies for the presidential campaigns. He is the host of the news talk-show, Hardball with Chris Matthews on MSNBC network. He frequently appears as a contributor in many TV shows like Morning Joe and The Daily Show.

Chris was born as Christopher John Matthews on 17th December 1945, in Philadelphia, Pennsylvania, United States to Mary Teresa Shields, a homemaker and Herb Matthews, a court reporter. Born into a Roman Catholic family, he hails from Scottish-Irish heritage. Besides, he is a happily married man.

The 73-year-old commentator, Chris is already committed to an award-winning news reporter, Kathleen Matthews. The pair's wedding was an intimate ceremony, attended by their close ones on 21st June 1980.

During the time of their marriage, the bride, Kathleen was 27, and on the other side, the groom was 35 years old. Despite their age-gap, there is no problem, and the couple is living cheerful moments since 39 years.

The married couple is blessed with three adorable kids. Their older child, Michael Kerry Matthews (born in 1983), is married to his college sweetheart, Sarah Staveley-O'Carroll on 21st March 2010, at the Charleston’s French Protestant Huguenot Church in Charleston, South Carolina.

Michael's wife, Sarah met Chris Matthews for the first time in November 2002 on a book tour held in Providence, Rhode Island. At that time, she was a little bit confused about Chris' program, Harball is hosted at ESPN, but later knew it was on MSNBC.

Their second child, Thomas Matthews is a prolific actor and producer who made his debut with a role of Francis Polito in the crime drama movie, American Hustle. Similarly, their young child, Caroline Matthews is a graduate of the University of Pennsylvania and also worked as an intern for former U.S. President, Barack Obama in 2010.

The host of Hardball, Matthews was once involved in a sexual accusation for making inappropriate jokes and comments about a female assistant producer on his show in 1999.

The woman later received a compensation of $40,000 from Chris, but this matter was further reviewed. Matthews also got a formal reprehension via email in 2017. But, he didn't respond to the email request for his response. However, the news spread widely and become a national problem of abusive behavior by men with the power of position against women.

Meanwhile, NBC News dismissed Matt Lauer, former Today host after a complaint of accusation against him was made during the Sochi Olympics in 2014. Following the incident, Lauer sincerely apologizes, but the criticism about him was completely false or mischaracterized by someone. On 8th December 2017, NBC News announced to require harassment-prevention training for all the staff and began a culture assessment of the division of news.

Chris Matthews has a total fortune of $16 Million as of 2019. Similarly, he earns $5 Million as an annual salary from his TV show, Hardball. Back in 2009, he had a salary of $3 Million on his TV program.

More to that, Matthews also appeared in many blockbuster films that are highly acclaimed. Some of his movies with all box office collection and budget are listed below;

Matthews is currently hosting his news talk program, Hardball, which is receiving good reviews from its episodes. The show received 4.6 out of 10 stars from 608 ratings. Just like him, some other TV hosts, including Allegra Riggio and Charlotte Laws are also hosting many TV special programs.

As an author, Chris wrote several books and came to attention after his book, Hardball: How Politics Is Played Told By One Who Knows The Game, which is about how Chris Matthews experienced a quarter-century in the field of politics. The book received four and a half out of 5 stars from 153 ratings.

Matthews' another book, Tip and the Gipper: When Politics Worked, was noted as The New York Times Bestselling novel, which about the historical dealings between Ronald Reagan and Top O'Neill. As of now, it costs $13.00, consisting of 127 used and 36 new ($5.11) and 16 collectible ($7.95).

On 31st October 2017, Chris wrote a book, Bobby Kennedy: A Raging Spirit, where he revealed the new portrayal of Robert F. Kennedy getting close to the political classic. He received the recognition of The News York Times Bestseller for his book.