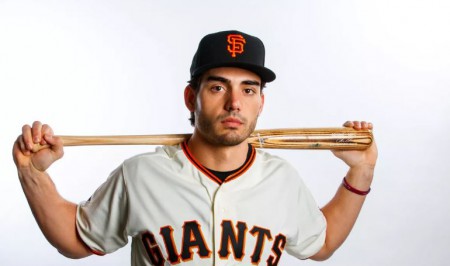 Who is Chris Shaw?

Today we are going to talk about one individual who has gained fame and money in a short span of time. We are talking about the 25-year-old, Chris Shaw, an American professional baseball outfielder in the San Francisco Giants organization.

The world of sports is very intriguing as people spent their entire lives on a particular sport in order to make their career. Take Chipper Jones, a former baseball player, for example. He is one of the most loved MLB players. And, many young athletes, are following the footsteps of their idol.

The young and energetic athlete, Chris Shaw has a decent net worth and recently in 2019, he was promoted to the Triple-A Sacramento River Cats. So, let's know in full detail about his personal as well as professional life.

Chris was born as Christopher James Shaw on October 20, 1993, in Stoneham, Massachusetts, USA. As of 2019, he is 25 years old, and his birth sign is Libra. Chris often posts pictures of his family on his social media. His father's name is Doug Shaw, and he also has a sibling brother.

Talking about his education, Shaw graduated from Lexington High School in Lexington, Massachusetts. New York Mets drafted Chris in the 26th round of the 2012 MLB draft but didn't sign and instead enrolled at Boston College where he played college baseball. San Francisco Giants drafted him in the first round of the 2015 MLB draft.

Shaw made his majors debut on August 31, 2018, and on September 3, 2018, he hit his first major league home run against the Colorado Rockies. In 2019, the Giants kept Shaw on the 40-man roster but demoted him to Double-A Richmond to work on his plate discipline. Likewise, on May 30, 2019, Shaw was promoted to the Triple-A Sacramento River Cats.

Talking about Chris Shaw's personal life, it seems that he was in a romantic relationship with a beautiful woman. However, at the present moment, he is enjoying his singlehood. Back on December 10, 2016, Shaw shared a picture of a girl sitting on his lap who appeared to be his girlfriend.

As of 2019, Chris is probably single as there is no news of his relationship status. Also, he hasn't shared his intimate details with anyone. Also, he is extremely focused on his professional career.

Is Chris Shaw dating anyone?

There are no rumors about Chris Shaw dating anyone, and also he hasn't been spotted with any girls out in public. Therefore it seems that Chris isn't dating anyone and doesn't have a girlfriend.

Well, there is no doubt that Chris is very handsome. Talking about his physical stature, he stands at the height of 1.92m (6 feet 3 inch) and has a bodyweight of 226 lbs (102 kgs). Just like an American lacrosse player, Jordan Levine, Chris has a stunning personality. In case he engages in a new relationship, we will update very soon.

Net Worth and Contracts

As of 2019, Chris has a net worth of $600,000 and the 25-year-old baseball player has still a lot to achieve. Have you heard of Brian Shaw? Well, he is not related to Chris, and also he is a strongman with a total wealth of $2 million. No doubt in the coming days his earnings and income will rise even more.

How much is Chris Shaw's Salary?

Shaw currently plays as an outfielder for the San Francisco Giants organization. His annual salary is now reported as $555,000. Back in 2015, Chris' signing bonus with the Giants was $1.4 million as per the reports. Further, in 2018, he earned $90,830 as total cash earnings.