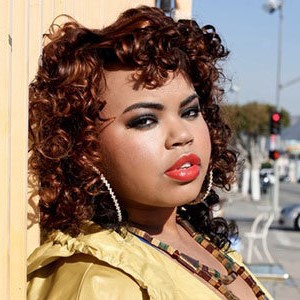 The 26-year-old, Chyna Tahjere Griffin is an emerging star in the world of the music industry. She is best known as the daughter of Faith Evans and Kiyamma Griffin. Chyna's mother, Faith, is an American singer, songwriter, record producer, and actress. Meanwhile, her father, Kiyamma, is a music director and record producer.

Griffin is slowly rising through her unique and independent production. Besides, she is a young makeup artist and is a leading force to reckon in the modern generation of music. Chyna got an opportunity to work with Mahisha Dellinger, founder of CURLS, a leader in the natural hair care industry. Another celebrity kid, Jaden Smith, has risen to become a young sensation.

Is Chyna Tahjere Griffin Dating Anyone?

At the age of 26, the lovely Chyna Tahjere Grifin is still single, and she is not dating anyone. The details about her love life and boyfriend are still a topic for gossip. As for now, Chyna is focused on her professional goals rather than being in a romantic relationship.

The rising musical star and make-up artist, Mis Chyna Tahjere Griffin, is known for being the daughter of Faith and Kiyamma Griffin. However, she prefers to keep her personal life matters private.

Chyna's mother, Faith Evans, is an artist who sold over 18 million records worldwide and has a career spanning over two decades. Apart from her recording career, Evans is mostly recognized as the widow of the New York rapper Christopher "The Notorious B.I.G." Wallace.

On the other hand, Chyna's father, Kiyamma, is also and musical artist and record producer. He is the owner of Quan Entertainment Inc and has previously worked with the likes of Faith Evans, Michael Jackson, and Mary J. Blige.

Evans was just 19 years old when she began dating Kiyamma, then a local musician. Faith was so much in love with Griffin that she decided to give up her education at Fordham University, New York.

From their relationship, Faith gave birth to their first daughter, Chyna. The couple then moved to Los Angeles to start a new life. However, their romantic affair lasted for a short time without marriage. Kiyamma helped launch his then girlfriend's career, but afterward, he went under the radar.

After separating from Griffin, Evans married her first husband, The Notorious B.I.G., in 1994. Evans once told in an interview that her daughter Chyna and B.I.G had a beautiful bond. Meanwhile, Kiyamma married Ashley Griffin in 2015.

Miss Chyna is the oldest child of Faith Evans and has three younger siblings from her mother's relationships. Evans has three sons and one daughter from her past marriages. She is currently married to a man named Stevie J.

Miss Chyna, a rising musical star and make-up artist, has a net worth of $300,000. Her mother is widely known as the First Lady of Hip-Hop while her biological father is a CEO of Heavenly Soul Music Group. Although her mother and father are millionaires, Chyna prefers to be successful on her own.

Chyna, who studied at NYU's Clive Davis Institute of Recorded Music, is a part of the crew member in Oprah's program called Mind Your Business with Mahisha. Just for the information, her mother Faith has a net worth of $9 million.

Talking about Chyna's annual salary, she might earn somewhere between $24,000-$45,000. As per sources, a makeup artist's salary can range from $22,630 to $124,960 depending on location, level of experience, specialization, industry, and quality of portfolios. Therefore, along with her music career, Chyna earns a desirable income from her other interests as well.

This article is about Miss Chyna Tahjere Griffin, who is the first daughter of a renown singer, Faith Evans. To know about your favorite celebrity, follow marriedceleb.