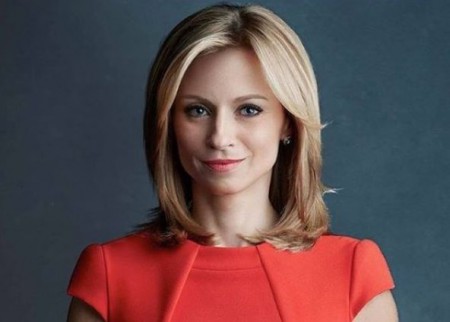 Among the most recognizable faces in business media, Courtney Reagan is one of the renown reporters who works at CNBC as a retail reporter just like Leslie Picker. Reagan became the network's general assignment reporter in 2011 for Business Day programming, and she regularly contributes to the Nightly Business Report on public television.

Courtney received the National Retail Federation’s Influencer Award on “The List of People Shaping Retail’s Future 2016.” Apart from having a lucrative professional career, Reagan also has a blissful married life.

CNBC's retail reporter Courtney Reagan is a married woman, but let's hear her about the proposal first. She got the most adorable surprise from her then-boyfriend, Jared Baker, when he proposed her on-air during the taping of Nightly Business Report on November 1, 2013. The couple began dating in 2006 and waited seven years for their engagement.

YouTube: Watch the live proposal made by Reagan's boyfriend, Jared!

The lovely event happened when Reagan thought she was doing a holiday shopping segment on "Nightly Business Report." And when she got into the topic of engagement rings, her boyfriend of seven years appeared on set and surprised her with heartfelt words.

Reagan instantly broke down with tears on her eyes as Jared began to propose.

"It's been a long time. Seven years... I love you so much. I have since the day I met you. I've always known you were the one. I love your smile. I love your laugh. I even love the way you dance. Will you marry me?"

Baker got down on one knee and presented an engagement ring. No doubt, she said yes, and then they kissed passionately.

Courtney and her husband, Jared, exchanged their wedding vows on August 31, 2014, at the St. Joseph Church, located in Dayton, New York. The couple has been happily married for over five years as of 2019.

Being together for so long, the pair doesn't have any children yet. Further, they haven't revealed their plan for having kids any soon.

Know A Little About Courtney's Husband

Baker graduated in accounting from the University of Illinois and has over a decade of experience working in financial services.

Reagan And Baker's Marathon For Cancer Cause

The CNBC reporter and her spouse are heavily involved in marathons and have taken part in State Marathons since 2012. The same year, Reagan raised over $13,000 for the Pancreatic Cancer Action Network in honor of her Aunt.

Reagan was also crowned as the top individual fundraiser for her entire team, and in 2013 and 2014, she raised over $28,290 and $25,000 for the American Cancer Society’s DetermiNation team.

On October 15, 2019, the retail reporter shared a picture along with her husband. They had joined the cancer society team, and their Chicago DetermiNation marathon team raised over $1.4 million. Additionally, Reagan won a silver medal while her spouse won the bronze medal.

The CNBC's retail reporter, Mrs. Courtney Reagan, has a net worth of $10 million as of 2019. The primary source of her income comes from her profession as the finance reporter at one of the leading business network.

Further, she earns an annual salary of over $650,000 from CNBC. In addition to covering the retail business, Reagan also contributes to market coverage at the New York Stock Exchange, Nasdaq Marketsite, and New York Mercantile Exchange.

Talking about her memorable works, she has interviewed celebrities including Martha Stewart, Reba McEntire, Kris Jenner and daughters Kim, Khloe, and Kourtney Kardashian. Also, she has covered the 2008 financial crisis, hurricanes Irene, and other national general assignment stories.

To know about your favorite media reporter, follow marriedceleb.