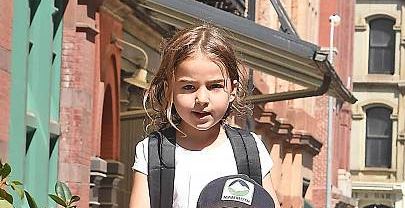 Dessa Blaine White is the Young Magician Who is raising to fame due to her exceptional illusion trick. She is the daughter of illusionist, endurance artist, and extreme performer, none other than David Blaine. Her father is one of the most famous Magician on the planet whose endured magic trick and illusion has made several world records over the year.

She was born on January 27, 2011, and is pursuing her career as a magician at an early age. Currently, she is in quarantine because she has tested positive for Coronavirus and forced to live in France with total isolation without her father David Blaine. Scroll down to know about her father current relationship status.

The famous magician David is currently leading a single life, and it can be confirmed that he is not in the relationship as per 2020. Although he seems to keep his self out from the media, we can assure that he has no affair for now.

However, Blaine is under investigation. The Daily Beast announced that Blaine is suspected of sexually harassing at least two people. The New York Department of Police has been informed and is actively reviewing the accident. But so far he is not found guilty.

Who Is The Mother Of Dessa Blaine?

Before their engagement in 2009, any details about their romantic affair is still a secret. Neither David nor Alizee has spilled any beans about how their love affair started.

After spending years in relation, David and Alizee welcomed their first child as Dessa Blaine On 27 January 2011. After giving birth, the duo initiated to faced some difficulties in their love life. So without any specific they got separated.

After the separation, David keeps his daughter with him because, at the time, Dessa's mom was unable to afford a child. And from her dad she learned the impressive skill of magic. Scroll down to know more about Dessa.

Separated From The Father Due To Novel Coronavirus

The COVID-19 has spread its terror throughout the globe, and so far millions of people are infected. More than that, thousands of them have died due to this epidemic. Sadly, David Blaine's daughter is also tested positive for COVID-19.

Moreover, Dessa and David were divided on account of prevention measures to prevent coronavirus transmission. Similar to Dessa, Tom Hanks and his wife are also infected with this virus. Dessa and her mother, Alizée Guinochet, live in Paris. Meanwhile, David Blaine uses FaceTime to speak to his daughter as they are apart.

Unlike The Sacred Riana, the young magician Dessa is yet to earn her fair share of the money. She's just started to learn some tricks from her father and sometimes perform with him. As of now, she is enjoying his father's million-dollar net worth.

She enjoys an enormous amount of wealth through her father earning, who is one of the highest-earning magicians of the 21st century. Her lifestyle looks pretty amazing which can be viewed on her father's social media.

According to Forbes, David earned $6 million in 2017 and $13.5 million in 2018. He became one of the highest solo magician earners as performed more than 50 shows around North American, and during the period, he estimated to earn $12 million.

And according to celebritynetworth, he has an estimated net worth of $40 million. whereas another magician Jon Dorenbor has a wealth of $2 million.