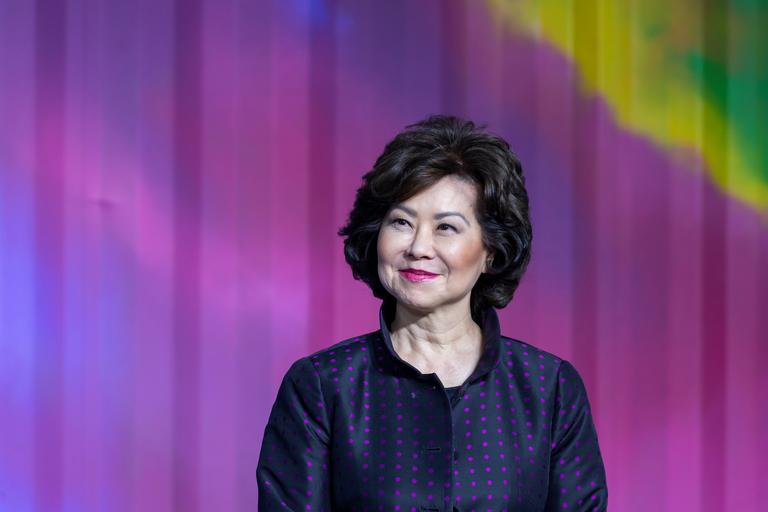 The 12th Director of the Peace Corps was born on March 26, 1953, in Taipei, Taiwan, to Chinese parents, James Si-Cheng Chao, entrepreneur and philanthropist, and Ruth Mulan Chu Chao, a historian. Lan Chao had left the Chinese mainland after the outbreak of the Chinese Civil war. Chao's family immigrated to the United States in the year 1961 when she was eight years old. In Taipei, Elaine went to Tsai Hsing Elementary School for kindergarten and first grade.

In 1975, Elaine graduated from Mount Holyoke College, Massachusetts with a Bachelor of Arts degree in Economics. Later in 1979, she received a MBA degree from Harvard Business School. She also received a Doctor of Human Letters Degree from Georgetown University along with other 37 Honorary Doctorates. Elaine Chao is the first Asian-American woman in the history of the United States to be appointed in the President's Cabinet.

The 66-year-old politician worked as the president of the United Way of America from 1992 through 1996. A member of the Republican Party same as Chuck Grassley, also served as board of directors on several firms and worked for the Hudson Institute and The Heritage Foundation.

The former Commissioner of the Federal Maritime Commission tied the knot with Addison Mitchell McConnell Jr., the longest-serving U.S. senator for Kentucky on February 6, 1993. The couple exchanged the wedding vows in an intimate wedding in Chapel of the US Capitol.

The date chosen for their big day was special for three reasons; first, it was Ronald Regan's birthday; second, it was just before Chao's 40th birthday, and third, it was right before a one-week Senate recess.

Though the pair have been married for almost three decades, they haven't welcomed any children. Chao shares three children from her husband's previous marriage.No any controversies or rumors about their married life have been the topic of public attention. The couple must be living their espousal life elegantly.

Meeting of Elaine and Mitch

Elaine, the Secretary of Transportation, and Mitch McConnell, the US Senate Majority Leader, met in the early 1990s in Washington, DC. The couple had a mutual friend Stuart Bloch, through which they first met. Stuart and Mitch had known each other since 1960. Mr. Bloch was married to Julia Chang Bloch, who was the mentor of Elaine.

It didn't take long for the two to make a connection after their first meeting. Three years later in 1993, the couple got married in Regan's Birthday. The husband and wife duo is one of the powerful political couples in the United States.

Elaine's husband, Addison Mitchell McConnell Jr., is the Senate Majority Leader and Kentucky's senior United States senator. The American Politician is the longest-serving Republican U.S. Senate leader in history. In 1984, Mitch was elected to the Senate for the first time and had been re-elected five more times since then.

The Scots-Irish and English descent, Mitch was born on February 20, 1942, in Sheffield, Alabama, as the son of Addison Mitchell McConnell and Julia Odene. In 1964, McConnell received a B.A. degree in political science from the University of Louisville. Mitch graduated from the University of Kentucky College of Law in 1967, where he served as the president Student Bar Association during his college days.

The Southern Baptist was previously married to Sherrill Redmon in 1968. The duo welcomed their first daughter Elly McConnell in 1972. Then again, they were blessed with two more daughters, Claire McConnell and Porter McConnell, in 1976 and 1979, respectively.

Sadly, the couple got divorced in 1980, just a year after they welcomed their youngest daughter. Soon after the divorce, Sherrill was appointed as the director of the Sophia Smith Collection and also became a feminist scholar at Smith College.

How Much is Chao's Net Worth?

The secretary of transportation holds the jaw-dropping net worth of $24 Million, which is way more than the net worth of Stacey Abrams. The average salary of a politician in the United States is $174,000 per year, which further adds to her fortune.

The Republican member has severed in numerous honorable positions in the United States. Elaine served as Secretary of Labour under the presidency of George W. Bush's from January 29, 2001, through January 20, 2009. She was appointed as Secretary of Transportation on January 31, 2017, under Donald Trump's presidency and is currently serving under the same position.

Elaine's spouse holds a staggering net worth of $22.5 Million. Mitch is actively working in various governmental positions since 1975. Serving in numerous honorable positions for more than four decades, he has successfully accumulated millions of dollars as his net worth.

The fortune combined of Mr. and Mrs. McConnell comes in eight-figures. The political power couple is living a lavish life with such a huge amount.

Chao Comes from a Wealthy Family

According to the Washington Post, the net worth of Chao was $3.1 Million in 2004. Later in 2014, her net worth increased sevenfold, from $3.1 Million to $22.8 Million. Coming from a wealthy family, Chao received the inheritance after the demise of Chao's mother in 2007, which resulted in an increase of her fortune by millions.

During the re-election campaigns of Mitch McConnell's Chao's father donated millions of dollars. The Chao family is the top contributor of the Republican Party of Kentucky, donating approximately $525,000 over two decades. Similarly, in 2012, the Chao's family donated $40 million to Harvard Business School for scholarships for students of Chinese heritage and the Ruth Mulan Chu Chao Center.

If you are interested in reading more articles related to politicians, stay connected to MarriedCeleb.