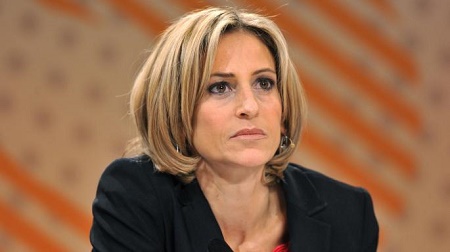 Who is Emily Maitlis?

Have you heard the BBC Two Newsnight? If yes, then you are definitely familiar with the name Emily Maitlis who is recognized as one of the main presenters in the show since January 2014. Maitlis is a British journalist, documentary-maker and newsreader for the BBC.

Emily Maitlis was born on 6 September 1970 to the parents Marion Maitlis and Peter Maitlis. She holds British citizenship and belongs to white ethnicity. Further, she was raised in Sheffield, Yorkshire and earned her high school education from King Edward VII School. Later on, Maitlis graduated from Cambridge University.

As of now,  Emily Maitlis is working in Newsnight of BBC Two since January 2014 as a main news presenter. Prior to working with the BBC, she served for Sky News, and for MBC News in Hong Kong, as a business correspondent. Moreover, the talented journalist made appearances on BBC London News, BBC News at Five, and BBC News at One.

Before starting work with news reporting, Emily served in Cambodia and China as a documentary maker for six years. In NBC Asia, Channel 4 and Sky, she made her prominent remarks. Besides, Emily is also very close to her fellow worker Fiona Bruce and Sophie Raworth.

TV reporter, Emily Maitlis is a happily married woman to her husband, Mark Gwynne. However, the couple have not yet officially disclosed it. The couple first met at the University of Cambridge.

As Maitlis' spouse belonged to a Catholic background, it was quite difficult for Emily to raise her children in her Jewish faith. Emily still managed a good life with her family members despite complications.

Maitlis and her husband Mark is parents of two children. Their first son Milo Atticus was born in July 2004 and they welcomed their younger son Max Atticus on 2006.

Currently, Maitlis' family enjoys a happy and harmonious relationship together.

Unfortunately, Emily colleague named Edward Vines had been stalking and harassing her for many years. Well, Emilya and Edward had attended the same college, Cambridge University and some sources revealed that she was repeatedly stalked from 2002.

Interestigly, Vines was was imprisoned for a year in 2016 and again sentenced to jail for four years in January 2018. Therefore, in fear of her children's safety, Emily had requested security. On 18 January 2018, she disclosed that the 20-years of harassment have effect her personal life a lot.

While shooting in March 2018 for her Newsnight show, the camera shot Emily inappropriately. She was shot putting her legs on display, which mistakenly revealed her undergarments, according to an article by dailymail.com on 3 March 2018.

While speaking to dailymail.com, Maitlis says sitting on the chair of her show is awkward and she wants to remind the cameraman to keep the camera angle.

How Rich is Emily? Net Worth

One of the well-known newsreader,  Emily Maitlis' net worth is estimated to be at $2 million. She has amassed this bulky amount from her career as an accomplished TV presenter.

With almost three decades of experience, Maitlis makes annual salary ranging from $291,258 to $303,173 thousand. However, the figure is well deserved as she has been in the media sector for over two decades. Furthermore, Emily is also one of the BBC's highest-paid female TV journalists.

Besides hosting, Emily has written some books for some news magazine and newspapers which is also another source of her income. Likewise, her some publications including The Guardian and The Spectator. Hence with such a heavy income, the British TV journalist is living a relaxed and happy lifestyle along with her family members.

Get more detail about celebrity from marriedceleb.