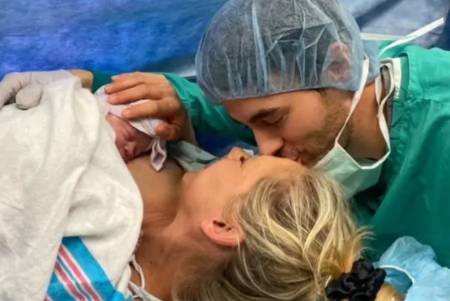 After the arrival of the couple's third child, Enrique shared a picture on Instagram, when he was carrying his daughter, who was sported with a beanie bow scarf on her head on February 14, 2020. In the Instagram post, he wrote a caption, saying, "My Sunshine" to his baby girl.

On the same day, Anna also posted an adorable picture via Instagram, while she was breastfeeding her baby. Besides, most of her friends and fans reacted with several hearts and kisses for their newly born baby.

The parents of the newly-born child are dating since the late-2001. After dating for 13 years, the couple eventually separated due to some misunderstandings in October 2013. But, they later reconciled their relationship and spreads good vibes in their love life.

Back in 2017, the couple announced that they're going to welcome their first child after reconciling their relationship for three years. More to this, Enrique and the Russian tennis player, Anna welcomed their twin children, Nicholas and Lucy on December 16, 2017.

Just like Enrique and Anna's third child arrived in January 2020, some other popular celebrities, including Jack Fincham and his former partner, Casey Ranger as well as Ashley Graham and Justin Ervin became parents after their kids born in the early-2020.