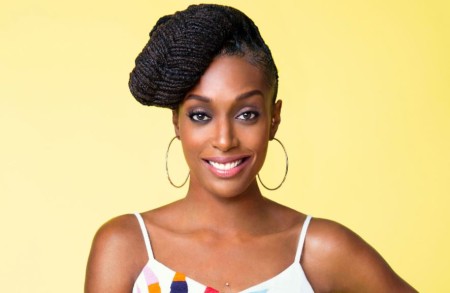 Franchesca Ramsey or popularly known as "Chescaleigh" is an American actress, YouTube personality, and activist. A former writer/contributor on The Nightly Show with Larry Wilmore, Ramsey first gained wide popularity after her commentary on racial issues went viral on YouTube. Since 2015, she has been the host of MTV web series, Decoded.

For her activism, Franchesca has won the People/YouTube Red Carpet Reporter Contest and a Webby Award in Public Service. She has appeared on many tv networks including MTV and MSNBC. Recently, Ramsey opened up about her sexual orientation in public. So, let's get to know some of the lesser-known facts about her.

Franchesca was a married woman!

The American activist was married to her high school friend, Patrick Kondas. The two were friends in school but later reunited at a party after graduation. Ramsey and Kondas began living together for many years until marrying on November 16, 2013.

The duo held their wedding in an outdoor ceremony. Everything was fine until Ramsey decided to separate from her husband in 2019. Further, their divorce was finalized in the same year. However, they didn't share any children.

Talking about Ramsey's ex-husband, Patrick is an entertainment attorney and podcaster. He is the founder of a company called, Kondas Law whose primary focus is to serve the film, television and web-based creator communities.

Until the National Coming Out Day 2020, Franchesca kept her sexual identity a secret. She was in a longterm relationship with a man, so Ramsey had difficulty addressing her issues. However, she publicly discussed being a bisexual and stated that many bisexual people have struggled in their coming out journeys.

While Ramsey was in relation with her former husband, they co-hosted a podcast called, Last Name Basis. Now they are divorced, Ramsey is currently single, and it is not known is she is dating anyone.

The exact information about Ramsey's personal earnings and wealth is unavailable. But some sources claim that she might have an estimated net worth of over $2.5 million. She works as a writer, content creator, actress, and activist, which adds a decent sum of money on her bank balance.

As a comedian, Ramsey was a contributor and writer for Comedy Central's The Nightly Show with Larry Wilmore. There her salary might be over $35,328. Similarly, Ramsey earns a desirable sum of money from her two Youtube channels. Rochelle Richardson and her sister, Lynnette Hardaway (Diamond and Silk) are also renowned Youtubers who speak on racial issues.

Ramsey earns around $15,000-$43,000 from her both channels. Also, she has an impressive number of followers on Instagram and Twitter. It seems that Ramsey has got a few sponsorship deals including RounGe, a nail art decoration and handmade wears.

The Oscar-nominated writer, Ramsey published a boom in 2018, which is a collection of essay where she explains her accidental position as racism and online abuse activist. She unexpectedly gained media attention after her video "Shit White Girls Say to Black Girls" went viral in 2012.

Franchesca Ramsey was born on November 29, 1983, in Florida, the United States to parents, Frankie B. Ramsey (father) and Learna G. Lincoln (mother). She is the only child of her parents.

Shane Dawson was called the king of edgy comedy on YouTube. He made funny sketches, impersonated celebrities and earned nearly half a billion views on his channel. However, Dawson's old racist and inappropriate videos has been resurfacing online, and recently YouTube demonetized his channel with major brands dropped their deals with him.

After Shane posted racial contents and remarks such as blackface, Ramsey and the community attempted to hold Shane accountable in 2014. Dawson's past videos showed him using jokes about rape, molestation, child abuse, and domestic assault.

Further, Dawson denied a 2016 clip of him from his podcast describing killing a social justice warrior was not about Ramsey. He later made an apology video on his channel. However, Shane has been facing wide criticism lately.