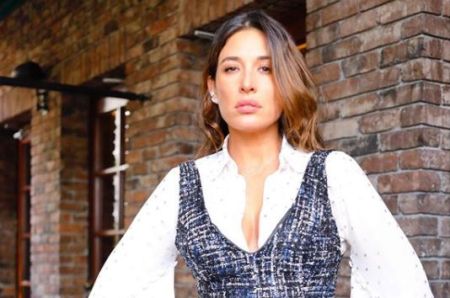 Giselle Itie Ramos was born on October 3, 1982, in Mexico City, Mexico. She was born to a Mexican father, Fernando G. Itie Agraz and a Brazilian mother Sandra Itie. Further, she has two siblings, a sister named, Mayella Itie and a brother named, Fernando Itie.

Giselle at a young age moved to Brazil with her family due to the devastating earthquake in Mexico City in 1985. She later pursued a theatre course at a media mass company, Televisa. Let's know some of the lesser-known facts about this beautiful actress.

The 39-year-old actress is currently raising her son as a single mom. Giselle welcomed her first child, baby boy, Pedro Luna on March 2, 2020. During her pregnancy, she regularly updated her health condition to her followers. So, who is the father of her baby?

Well, the father of Giselle's child is Brazillian actor, Guilherme Winter. They began dating in November 2015 after meeting during recordings of Record TV's primetime telenovela, "Moses and The Ten Commandments." In the show, Itie and WInter played the lead roles of Zipporah and Moses.

Giselle and Guilherme ended their five years of relationship in 2019. The actress revealed her separation on social media and said everything was fine.

Giselle was a Married Woman!

The Bela, a Fela actress was previously married to actor, Emilio Dantas. Their wedding ceremony took place in February 2015, on Corumbe beach in Paraty. Giselle's mother Sandra helped with the preparations.

The former couple went to Thailand for their honeymoon. Unfortunately, within a year, Itie and Dantas divorced. Neither party revealed the reason behind their separation.

Giselle Itie has a net worth of $5 million as per celebritynetworth. She has been active in the entertainment industry since 2001. Therefore, Itie has amassed a decent fortune from her nearly two decades of a professional acting career. Another Portuguese-Brazilian actress, Alba Baptista also has a decent wealth.

The average salary for television actors in Brazil ranges somewhere between $24,565-$47,849 per episode. As Giselle is more active working on television, she earns over $40,322 per episodes.

Besides, she has appeared in several movies as well including the Hollywood blockbuster, The Expendables where Arnold Schwarzenegger also had a cameo. The movie went on to collect $274.5 million at the Box-office against the production budget of $80 million.

Watch a clip of The Expendables featuring Giselle Itie!

Before acting, the 1.73m tall Giselle tried doing modelling. However, she had a strong desire to become an actress. She began her career in telenovelas like Os Maias and Picara Sonhadora. In 2019, she appeared in the comedy series, Homens?