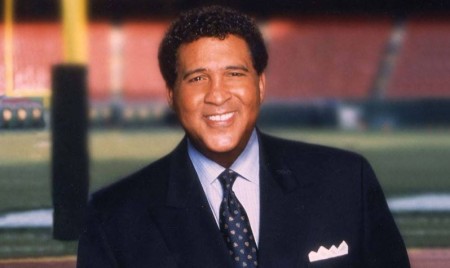 The 74-year-old, Greg Gumbel is an American television sportscaster who is known for his various assignments for CBS Sports. Most notably, he is known for broadcasting the National Football League, NBA, and NCAA basketball. He currently works as a play-by-play broadcaster for the NFL on CBS and is the studio host for CBS' men's college basketball coverage.

Gumbel became the first African-American announcer to call play-by-play in the U.S when he announced Super Bowl XXXV for CBS in 2001. He has been active as a sportscaster for a long time and is one of the respected personalities in the business.

Greg Gumbel was born on May 3, 1946, in New Orleans, Louisiana, the U.S. The oldest of four children born to parents, Richard (father) and Rhea Alice LeCesne (mother), Greg belongs to Creole ancestry. His father served in World War II and later worked as a judge.

One of the best sportscasters, Greg Gumbel, not only enjoys his profitable career, but he also has an extravagant married life. The CBS sports anchor has been married to his longtime wife, Marcy Gumbel, since 1973.

Greg's spouse, Marcy, was born on April 3, 1949, as Marcella Kaszynski. She has previously worked as a business manager. The Gumbel couple has been together for 47 years as of 2020. They have only one daughter named Michelle, born on May 12, 1969, four years before her parent's marriage.

Michell graduated from Roger Williams College in the early 90s. She is not particularly interested in her father's profession. Also, Greg has told on multiple occasions that his daughter stays far away from sports activities.

Greg Gumbel has a net worth of $16 million as per celebritynetworth. He has covered major sports tournaments, including NFL, NBA, Daytona 500, and many more. Greg earns an annual salary of $4 million from his position as the CBS sportscaster.

Gumbel has worked for several high-profile networks, including CBS, NBC, ESPN, MSG, etc. With a career spanning over 45 years, Gumbel has amassed an impressive fortune. On average, the sports anchor earns around $48,354 per year. Therefore, we can say that Gumbel's yearly income is higher than his colleagues.

Like Gumbel, another longtime sports director Mark Giangreco earns a hefty sum of money. On the other hand, Greg's brother, Bryant, has a net worth of $25 million.

Greg was a medical supplier in Detroit before he became a television sportscaster in 1973. With his brother's help, Greg went on to work for WMAQ-TV for seven years. Jackie Bange, an award-winning journalist, also began her career with the same station.

In 1988, Gumbel began his CBS career as a part-time NFL announcer. He was the prime time anchor for the 1994 Winter Olympic Games as well. In 2001, he became the first African-American announcer to call play-by-play of the Super Bowl XXXV.

Throughout his career, Greg has won several prestigious awards.  A three-time Emmy award winner, Gumbel is one of the board advisors of a charity organization, March of Dimes. In 2007, he received the Pat Summerall Award. Further, Gumbel is also a member of St. Jude Children's Hospital Athletic Board.