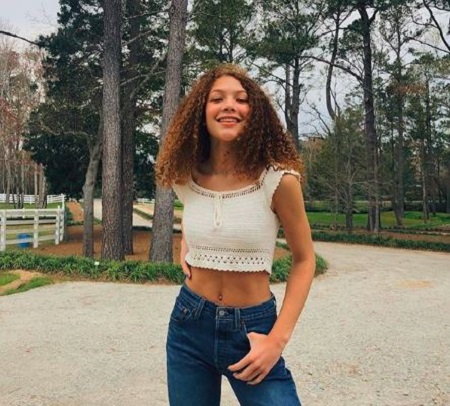 American celebrity child, Isabella Strahan has grabbed popularity since her birth. Well, she is famous as one of the twin daughters of famous sports personality Michael Strahan and his second wife, Jean Muggli. Well, Michael played with the New York Giants of the National Football League (NFL) for 15 years.

Now, he as a host of ABC's morning television show Good Morning America (GMA) and as a football analyst for Fox. Now, she and her twin sister Sophia Strahan is highly active in volleyball games and equestrian events. Sophia and her twin sister Isabella Strahan were born on October 29, 2004, in Los Angeles, California.

Know About Her Personal Life

Fifteen years old Isabella does not seem to be engaged in any kind of dating games right now. In fact, her love life remains tight-lipped. Thus, we can't suppose without evidence that she is dating romantically her boyfriend.

However, Strahan and her beautiful sister Sophia, the 5 ft 5 inc tall keep posting their sisterly beautiful moments on their respective Instagram account. Also, they certainly comfort travelling with their separated dad and mother.

While their parents are no more together, they enjoy excellent parental love and care. The ABC host Michael is a doting father who prides himself on keeping his four kids close to him.

On his IG wall, he shares various incredible pictures with them and side that his kids were the source of his strength. He once explained to People saying:" I love being with the kids. To me, it’s all about family, now more than anything".

Isabella's father Michael and mother Jean first met one another back in 1999 at a spa located in Manhattan. In one of the interviews, the duo shared that they fell in love with one another at first sight.

After their first date, the former couple walked down the aisle in 1999 at a private venue in North Dakota. From the marital bond, Muggli and Strahan shared a twin daughter. The formerly married pair were parenting their daughter jointly.

Everything was going fine, but they divorced in 2006. Jean claimed that Michael used to abuse her while they were in a relationship. She also alleged that Michael is gay and that was the reason behind she filed for separation.

Yes, her dad, Michael was in a marital relationship with the interior designer and decorator Wanda Hutchins. The couple exchanged their wedding vows in 1991 in an intimate ceremony. But their marriage life turned sour after five years, and they parted their ways in 1996.

After the split, Michael stated in an interview that the divorced came as a mutual understanding. From the marital alliance, they shared two children Tanita Strahan, born on born on October 11th, 1991 and Michael Anthony Strahan Jr., 25.

They started dating in October 2007 and later engaged on 22 May 2009. The pair, however, parted their ways after five years of their engagement in July 2014.

Afterwards, the 6 ft 5 in tall host began dating criminal girlfriend Kayla Quick in 2015 and is still going smoothly. But they keep their romance private. Before that, he was in a romantic affair with a girl named Stefani Vara from 2006 to 2007.

Isabella has not started her own career at the moment. But she is living a rich lifestyle under her parent's assets in Los Angeles, California.

Her father Michael has a net worth of $65 million which he accumulated from his successful NFL career and as a television host as well. As per celebrity net worth, he currently makes an annual salary of $17 million from endorsement and hosting works.

Further, Strahan pays $18,000 a month to Muggli in child support. Also, he paid her $15 million in a divorce settlement.