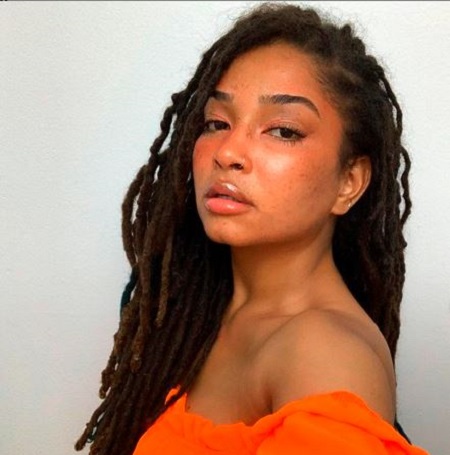 The growing girl, Tanita Strahan came into the limelight actually since her birth date. She is famous for being the oldest daughter of professional American former footballer, Michael Strahan. He played 15 years with the New York Giants of the National Football League (NFL).

Currently, he works as a football analyst for Fox and host for ABC shows. And Tanita works as a Visual Artist who shares her drawing, painting, design, on Instagram. Also, she has a Youtube channel under the name The Infinite Finesse Podcast, where she shares a soul and fitness podcast series.

Yes, the 28 years old gorgeous Tanita is happily enjoying her love life. She has been in a romantic relationship with her long term boyfriend, Calenta Mincey. He is an Art illustrator and singer who released his debut album Graveyard on 27 June 2019.

After scrolling their Instagram account, it seems the two has been dating since 2012 and is still going high. They shared their first photo on June 26, 2012. So that means that the couple has already completed their 8 years of the love journey without complications.

On July 7 2020, they have celebrated their 8 years of love anniversary. Further, Strahan and Mincey frequently share various hanging out beautiful photographs including their romantic dates on their respective IG wall.

Yes, the former NFL star Strahan is married twice in his lifetime. Firstly, he tied the knot with his first wife, Wanda. The couple exchanged their wedding vows in 1991 in an intimate ceremony.

Their marriage life turned sour after five years, and they parted their ways in 1996. After the split, Michael stated in an interview that the divorced came as a mutual understanding. He further added, they were just young and weren't meant to be together at the time.

After his first divorce, Michael found love again at a spa. He met a woman named Jean Muggli, who later on accused him of abuse. After their first date, the former couple walked down the aisle in 1999 at a private venue in North Dakota.

His second marriage was also a failure, and the two divorced in 2006. Jean stated that Strahan physically assaulted her and also said he was gay. When the world turned upside down for Strahan, his ex-wife Hutchins came out and reported that he's a good man and defended him.

How Rich is Tanita Strahan?

Despite being a daughter of a celebrity, Tanita must be making a decent amount of money as a Visual Artist. So, her annual salary might fall in around $45,577, which is the average salary of the visual artist in the United States. Her net worth is assumed to be over $100k.

Meanwhile, her dad, Michael's net worth is around $65 Million as of 2020. Being an NFL player, he must've accumulated a hefty amount of fortune. Back in 2002 and 2003 from his contract with New York Giants, he earned $20.6 Million.

After his retirement from football in 2008, he started his career as a talk show host and football analyst. To date, he has hosted a couple of popular shows such as FOX NFL Sunday, Pros vs. Joes, Good Morning America, and $100,000 Pyramid.

From his hosting career, he earns millions of dollars. According to sources, his income from hosting career is estimated at around $17 Million per year. In 2018, his salary went up to $21 million annually as a host and analyst.

She was born on October 11th, 1991 in Los Angeles, California, United States to the dad, Michael and Wanda Hutchins. Her mother Wanda is an Interior Designer and Decorator. Further, she has one younger brother, Michael Jr. Strahan, 25.

Also, Tanita has one half-brother Dorian from her mother's side and twins half-sisters Sophia Strahan and Isabella Strahan, born on 29 October 2004 from dad's side. Her grandparents are Gene Willie Strahan, the retired Major of the US Army and Louise Strahan.

Concerning her education, she graduated from the Fashion Institute of Design and Merchandising in Los Angeles, California. She received a degree in Associates of Arts (AA), Digital and Visual Communications.