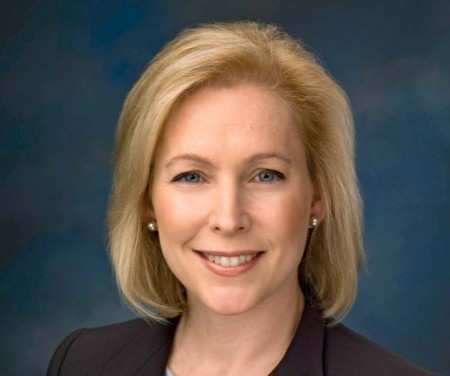 Kirsten Gillibrand is an American politician and lawyer who has been serving as the junior United States Senator for New York since 2009. Gillibrand, a Democrat, was a member of the U.S House of Representatives from 2007-2009. She is New York's second female senator after Hilary Clinton and was re-elected to full terms in 2012 and 2018.

Kirsten Elizabeth Rutnik was born on December 9, 1966, in Albany, New York, the United States. She is 53 years old as of now. Kirsten announced her candidacy in 2019 as a nominee for the President of the U.S in 2020, but she withdrew her name later.

Kirsten comes from a family of politicians and attorneys. She was born to her attorney parents, Polly Edwina Noonan (mother) and Douglas Paul Rutnik (father). Further, Kirsten has an older brother Douglas Rutnik and a younger sister, Erin Rutnik.

Kirsten is a married woman and is living a joyful life with her husband, Jonathan Gillibrand. Her spouse belongs to British nationality and is a venture capitalist. The couple first met on a blind date. At that time, Jonathan was pursuing his Master of Business Administration at Columbia University. Meanwhile, Kirsten was working at a law firm.

After dating for a while, Kirsten and Jonathan exchanged their wedding vows in 2001. Their marriage ceremony took place in a Catholic Church in Manhattan. The couple welcomed their first son, Theodore, in 2003. Likewise, their second son, Henry, was born in 2008. The Gillibrand pair have been married for 19 years.

Over the years, Gillibrand has become a recognizable face in politics, while her husband avoids the spotlight. However, he fully supports his wife and often participates on her campaigns. Jonathan and the children were right beside Kirsten when she first announced her presidential candidacy.

There is no exact information on Kirsten Gillibrand's net worth. Some sources state that she holds a net worth of $250,000, but there is no strong evidence. Since 2009, Kirsten has been earning over $120,000 per year as the junior senator. Do you know Gillibrand raised almost $30 million as funds from 2009-2013? Her fundraising ability helped her become a mentor for female candidates.

In the U.S Politics, there are lots of female personalities who has an impressive fortune. Some of the female senators who have decent income are Maggie Hassan, Jeanne Shaheen, etc.

In 2019, Kirsten faced a minor concern about her husband holding a financial stake in a medical device company. Jonathan is an investor in WindCrest LLC, but Kirsten said that the investment is worth less than $50,000. Further, Jonathan has worked at capital firms such as Redbrick Partners and his company, Venture Capital Partners.

Gillibrand relocating to the North Country

Kirsten and her spouse reside in Brunswick with their kids. However, the couple recently listed their 3,436-square-foot house for sale. The asking price for the luxurious home is $420,000. They had first bought the house in 2011 for $335,000.

Before Brunswick, the pair lived in Greenport. They sold their Columbia County house for $1.2 million in 2010. Since then, the family hasn't moved to any other state.