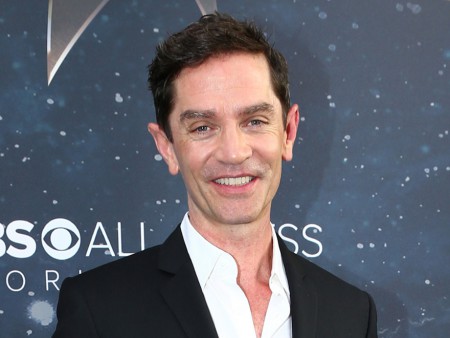 The 51-year-old, James Frain is a renown English stage and screen actor who is best known for his roles as Thomas Cromwell in the Tv series, The Tudors, as Azrael in the second season of Gotham, as David in Spartacus, and many memorable characters. Further, he is the recipient of the 2008 Drama Desk Award when he performed with ensemble performances in a play called The Homecoming.

Frain has appeared in several television series such as Soldier Soldier, Armadillo, 24, The Cape, Star Trek Discovery, etc. Apart from having a lucrative professional career as an actor, Frain also has a joyful married life. So, who is his wife?

The native of Yorkshire, Mr. James Frain, is a married man. He is the husband of Marta Cunningham, an actor, director, and producer. She is considered one of the inspirational figures in the world of art and movies. The couple tied their wedding knot on July 11, 2004, in an intimate wedding ceremony.

One of Hollywood's star couple, James and Marta, have been married for over fifteen years, and still, their romance looks as fresh as new. They both share beautiful chemistry, and till now, they aren't involved in any controversies, neither they have separated.

The details about the husband-wife early romance are hidden behind the closet. Both James and Marta are renown actors, so they might have met while working on some projects. The longtime partners often share their love through social media and on the occasion of their tenth wedding anniversary, James, as well as Marta, wished each other.

From their marriage, the talented actor, Frain, and the Emmy nominated director, Mrs. Cunningham, shares two children whose identities are yet to be revealed.

Know A Little About Marta Cunningham

The skilled actor turned director, Marta Cunningham has worked as an actress, writer, dancer, and choreographer. Currently, she focuses her energy on directing, writing, and producing movies and television shows. She also directed the star trek episode in which her spouse had a role.

James Frain has managed to amass a decent net worth of $3 million from his professional journey. The primary source of his income comes from his long career as a brilliant actor. Frain is one of Hollywood's versatile and respected actors who has a reputation for bold, intelligent performances in a diverse body of work.

James has collaborated with some of the finest actors and directors. Some of the movies in which he had a role have an excellent box-office record such as the 2010 Tron: Legacy, which collected $400 million at the Box-Office. Since 2017, Frain has been appearing in a television web series, Star Trek: Discovery playing the recurring role of Sarek.

Now, talking about Frain's wife, Marta Cunningham has a net worth of $1 million as of 2019. She owns her own production company named Sugar Sky Pictures, which is in the pre-production stage of several television series, films, and documentaries.

To know about favorite Hollywood actors and directors, follow marriedceleb.