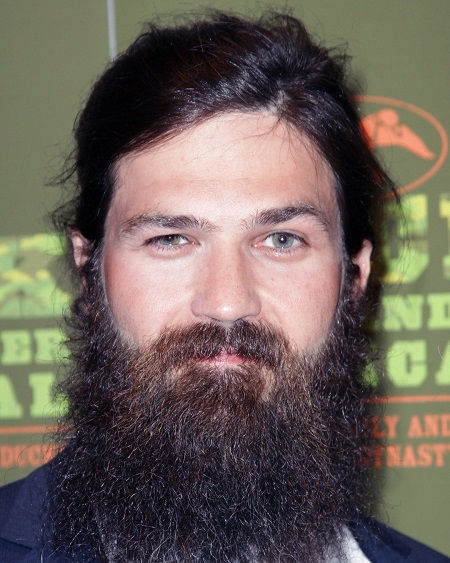 American reality TV personality, Jep Robertson is famous as the youngest son of American professional hunter, Phil Robertson, and his wife, Kay Robertson. He has also made his usual appearances on his family reality TV series, Duck Dynasty as the cameraman and editor. The show was raised on A&E from 2012 until 2017. Also, he starred on his own TV program, Jep & Jessica: Growing the Dynasty, alongside his wife, Jessica Robertson with their five children.

Jules Jeptha Robertson was born on May 28, 1978, in Louisiana, United States. Further, he has three older brothers named Willie Robertson (born on April 22, 1972 ), Jase Robertson (born on August 16, 1969), and Alan Robertson. Also, he has one half-sister Phyllis Robertson from his dad's side. His grandparents are Merritt Robertson and Willie Ezell. As per his citizenship, he is American and is of white ethnicity.

The 42 years old reality TV star, Jep is a happily married man. He tied the knot with his long term girlfriend, Jessica Robertson, born on November 12, 1980. Also, she was a part of the family's record-breaking reality TV series, Duck Dynasty.

Likewise, they had their first encounter at their hometown hair salon. During that time,  Robertson would be the person he would one day marry. Jessica used to come to his house to read the Bible. After her marriage ended she was still in a very fragile state. And the details of her first marriage are still under wraps.

They then continued to enjoy the company of each other and started dating. Soon two weeks later, Jep proposed they were married on 7 October 2001. All arrangements were made by Jep 's mom, Miss Kay. But sadly, the newlywed's duo did not have money for a lavish wedding. And they celebrated on a big dinner into the town's Olive Garden.

They couldn't let each other down and is really committed to their marriage despite their having to struggle in their marital life. Recently, the couple and the rest of their families moved to Austin, Texas from their beloved hometown West Monroe, Louisiana.

How Many Children Does Jep Shares With Wife, Jessica?

The baby brother of the Duck Commander flock and his wife, Jessica have five children, 3 daughters, and two sons together. After six months of wedlock, they welcomed their firstborn daughter Lily Robertson on December 26, 2002.

And the youngest son Jules Augustus Robertson born in September 2015 and adopted in January 2016. The entire family starred in A&E’s Duck Dynasty spinoff, Jep & Jessica: Growing the Dynasty from 2016 until 2017.  The show was about the efforts with their pot-pie-themed food truck.

How Much Is Jep Robertson's Net Worth?

As of July 2020, Jep Robertson has an astonishing net worth of $8 million. He has amassed his total fortune throughout his thriving profession as an American reality television personality.

Over his career, Robertson has made appearances on two TV shows named  Duck Dynasty and Jep & Jessica: Growing the Dynasty. Likewise, his brother Willie is the Duck Dynasty 's richest Robertson with the worth of $20 Million.

Besides it, Robertson and his wife, Jessica launched a new food truck named Jep’s Southern Roots in Dripping Springs, Texas in January 2018. Also, they started a YouTube channel to promote their company. Also, they published the book The Good, the Bad, and the Grace of God: What Honesty and Pain Taught Us about Faith, Family, and Forgiveness on June 23, 2015.