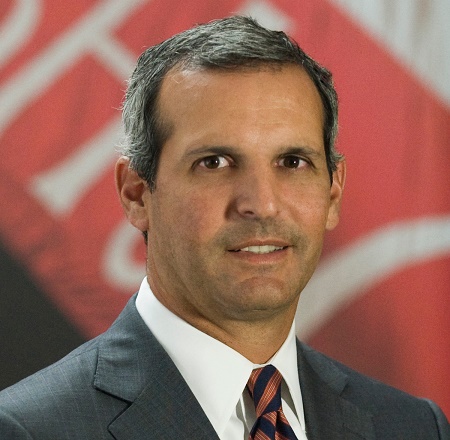 The Chicago native, John Molner, is an acclaimed financier and former banker known as the head of Mergers & Acquisitions at Chicago-based investment firms, 'Brown Brothers'. Besides that, he is also known as the second husband of renowned American journalist and author, Katie Couric.

The banker was born on 21 January 1963 in Chicago, Illinois, in the United States Paula Molner, and Herbert Moler. He holds American nationality and belongs to North American ethnicity. Moreover, he has two brothers, namely Tom Molner and David Molner.

Financier 56, first met the beautiful Yahoo! News Global anchor Katie Couric in 2011 and soon started dating. Molner proposed his now-wife in September 2013 after two years of romantic relationships. However, Couric immediately didn't accept his proposal as she took a long time to respond to his proposal.

On 21 June 2014, Molner and Couric shared the wedding vows in East Hampton, New York, at the backyard of Katie's house. They walked down the aisle in a private ceremony full of music and laughter.

On a special day, the bride looked incredibly gorgeous, wearing an embellished ivory gown along with 5.5-carat diamond earrings and a diamond bracelet. Further, the occasion was officiated by the pair's close friends and family.

Now, the couple lives a happy life together alongside their kids. Moreover, Katie in an episode of, "The Ellen DeGeneres Show," gushed about her married life and husband, she said

"I feel really lucky because he's funny and kind and really smart and great company. You know, you forget how important it is just to enjoy being with the person. You really appreciate it when you enjoy being with that person. So, I'm really happy."

The couple is together for five years now without any rumors of disputes and separation. More to that, their relationship is going stronger day by day.

John was previously married to his first wife, Jane Franke, whom he divorced. The two, however, have not shared much information about their marriage details to the media. Even up to this point, the cause of their divorce hasn't appeared in public.

The former couple shares two children; a daughter Allie Molner, 20, and a son Henry Molner. On the other hand, his wife, Katie, was once wedded to John Monahan, who died at the age of 42 due to colon cancer. Moreover, she has two daughters with Monahan, namely Elinor Tully Monahan, 28, and Caroline Couric Monahan, 23.

Besides, Molner was once accused of cheating his former girlfriend, Jessica Hu. As per Hu's statement, they were in a relationship for two years. Also, Jessica found John cheating her with his current wife, Katie. Subsequently, Molner told Jessica she was too young for him and ended their two-year-long love affair.

An American business executive who graduated from Trinity College and the University of Chicago Booth School of Business has a net worth of $20 million as of 2019. He makes a compelling earning from his sucessful profession as a famed banker and financier.

According to PayScale, a Business Executive earns a salary of $85,163 per year.in the United States. Besides this, John Molnercurrently livesa luxurious life in a $12 million worth mansion, brought back in 2016.

On the other side, Molner's wifeKatie Couric is one of the renowned journalists in America with a whopping net worth of $75 million as of 2019. She has amassed this bulky sum throughout her anchoring and writing career.

Do visit Marriedceleb for more Biographies and Gossips!!!