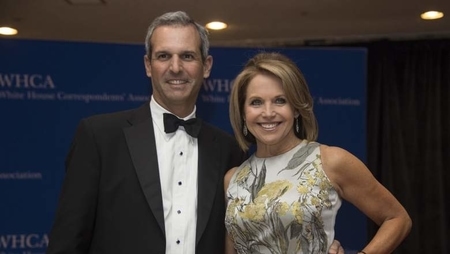 On June 21, 2014, Katie Couric and her husband John Molner shared the happiest moment in their life. It's the second marriage for Katie after her first husband, Jay Monahan passed away in 1998 because of Colon cancer.

The former CBS host walked down the aisle with a financier John in a not too traditional wedding at the backyard of her home. Are you curious to know more about the wedding? If yes, then stay tuned as we explore more into her matrimonial ceremony.

The Groom Planned the Wedding

Talking to People, John said that he had to get involved in this marriage to happen. He did all the planning for the couples' big day, and Couric helped her future hubby on the side. When the time arrived, the couple discarded the traditional way and walked down the aisle by holding each other's hands.

Their children accompanied the pair as they were arriving to take center stage. For the big day, the duo chose Katie's East Hampton's home backyard, which kept the wedding a low key. Their close friend John Ellis played the role of a Reverend and officiated the marriage by pronouncing them, husband and wife.

Do you want More Details?

While exchanging the wedding vows, Katie looked stunning in her ivory, crystal beaded and embroidered Chantilly lace halter gown with a high neckline. Carmen Marc Valvo designed the perfect gown for the bride, and on the other hand, John looked dapper in his Navy blue suit.

After they were pronounced husband and wife, the duo joined the guests where the party commenced. The guests loved a strawberry lemon cake and not just that, some other delicious item provided by the Topping Rose House catering company.

The whole venue looked terrific with beautiful flowers, which went well with Katie's lovely personality. John and Couric were already in love when they went public with their affair in April 2012. On one beautiful day of September 2013, John took out a ring and proposed his lover on the beach at sunset.

Katie is now at Yahoo!

The fifty-seven-years-old anchor is currently contributing her skills as Global Anchor for Yahoo News. Previously she worked at CBS for the Today Show as a host. There she worked alongside her colleagues Tony Dokoupil, Gayle King, and Norah O'Donnell, to name a few.

After leaving CBS, Katie told in an interview that she achieved great things at CBS very soon. The achievement at short time period became the reason for her to leave Today Show and join Yahoo News. Some of her new and old colleagues attended her big day at East Hamptons.

After her first husband Jay died in 1998, due to colon cancer, Katie has become a massive advocate for cancer. She spreads awareness about the disease in a very dedicate way. Jay passed away, leaving Couric and two daughters, Ellie Monahan and Carrie Monahan.

Some years back, she performed a live endoscopy to raise awareness among the people about the disease. Recently on June 10, 2019, the news anchor posted a heart touching remembrance to her late husband. In her Instagram post, she wrote, if he were alive, then they would be celebrating their 30th anniversary.

Katie, furthermore, also hoped that Jay would be proud of her life now. As of now, she has dedicated her life to raising awareness among the public about Colon cancer.