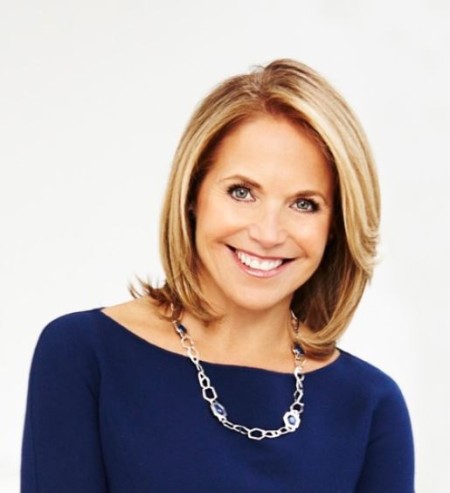 Primetime Emmy Award-nominated journalist, Katie Couric is well known for her work with all three top-notch networks, NBC News, CBS News as well as ABC News. She is the author of a New York Times best-selling book, The Best Advice I Ever Got: Lessons from Extraordinary Lives. Recently, she served as Yahoo's global news anchor.

Katie was born as Katherine Anne Couric on 7th January 1957, in Arlington, Virginia, the United States to Elinor Tullie Hene, a homemaker, occasional writer, and John Martin Couric, a public relative executive and news editor. Apart from this, she is a married woman.

The prominent journalist, Katie is in a happy marital relationship with financer, John Molner. The two walked down the aisle on 21st June 2014, in a small and private ceremony held at her home in The Hamptons.

The married couple first found their love while working on the news TV show; Good Morning America, where Katie was corresponding, and Molner was an editor in 2011. They shortly began dating and engaged in September 2013 after being in a two-year relationship.

The pair are also starring in the online cooking web-series, Full Plate with Katie & John, featuring on the Sur La Table website. Recently, they celebrated their 5th marriage anniversary on the 21st June of 2019 but, hasn't shared children until now.

Katie Couric was previously married, Jay Monahan, an American attorney on 10th June 1989. After living for nine years, their conjugal relationship ended with the demise of her spouse on 24th January 1998. The cause of her husband's death was colorectal cancer. Monahan died at the age of 42.

The pair were the parents of two beautiful children from their nuptials. First and foremost, they welcomed their elder daughter, Elinor Tully "Ellie" Monahan, on 23rd July 1991. Couric later gave birth to their youngest daughter, Caroline Couric Monahan, on 5th January 1996. As of now, both of the daughters are involved in the field of acting.

NBC News' correspondent, Couric maintains a lucrative net worth of $77.5 Million. Similarly, she earns a salary of $10 Million as a global news anchor of Yahoo. Before her contract with Yahoo, her earnings were $6 Million. She also made $15 Million from her work at CBS News, becoming one of the highest-paid anchors.

Katie also featured as a news anchor for the news talk-show, Today, which is rated 4.8 out of 10 and gained a high rating from 8.4 million viewers through episodes with Couric. Just like her, Sheinelle Jones and Jacelyn Reeves also appeared on the same TV show.

Katie Couric is actively involved in charitable works as a fundraising endeavor. She is raising money for the needy peoples participating in many campaigns. She further attended the National Hockey League's Hockey Fights Cancer campaign.

Couric uses 10% percent of her income for the relief of underprivileged societies and individuals. She also became the Honorary National Chair of the National Parkinson Foundation's Moving Day campaign to help patients from Parkinson's disease.

The former Today Show host bought a villa located in East Hampton, New York, at $6.3 Million. Her house consists of seven bedrooms, six bathrooms, and a swimming pool of five blocks from the beach on 7,000 square feet.

Before the purchase of their current pile, Couric lived in an apartment valued $3.2 Million on Manhattan's Park Avenue in New York City, New York. Their former residence features five bedrooms, four and a half bathrooms on 4,000 square feet. They later listed their apartment on sale for $8.25 Million.

American author, Couric wrote her first book, The Brand New Kid on 10th October 2000. The story is about two individuals who were running and laughing during their first day of school. The price of her book is $14.19, which includes 35 new from $5.95 and 15 collectible from $3.95.

Katie published her second book, The Blue Ribbon Day, that narrates the story of the winning pair of friends who are back in a new adventure on 19th October 2004. The book has a price tag of $17.95, including 17 used from $3.46 and 3 new from $13.95. Her other books are Sugar Savvy Solution and The Best Advice I Ever Got.

Pursued in the Journalism Field

Katie Couric started her career as a journalist for the American news and morning talk show, Today, on NBC News from 1989 to 2006. She also co-hosted the Winter Olympics opening ceremonies with Mike Tirico in 2018.

Couric made her debut as a news anchor and managing director for the CBS Evening News. She also contributed to the news magazine, 60 Minutes. During her time on the CBS news, she interviewed former U.S. President, Barack Obama, Hillary Clinton, and George W. Bush, among others.

Katie began to work as a special correspondent for ABC News based in New York. From 2nd April to 7th April 2012, she co-anchored the ABC's Good Morning America with Robin Roberts. Her other notable TV works are Murphy Brown, This Is Us, and many more.