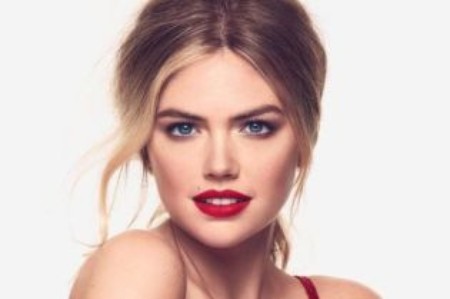 American model, Kate Upton is one of the most significant personalities in the modeling history, who is well known for her mole above her lip. More to that, AskMen Magazine also listed her #2 in the list of "Top 99 Women" two times. She is also a prominent actress who made her debut appearance in the romantic comedy movie, The Other Woman, for which she received several nominations for a MTV Movie Award and two Teen Choice Awards.

Upton was born as Katherine Elizabeth Upton on 10th June 1992 in St. Joseph, Michigan, United States. She is the daughter of Shelley Davis (mother) and Jeff Upton (father). Aside from this, she is a married woman. Find out more in detail about Upton's personal life in the following sections.

Strong4Me Fitness model, Upton and her husband, Justin Verlander are spreading love in the air. Her spouse full name is Justin Brooks Verlander but he is not commonly known by his middle name. The couple walked down the aisle on 4th November 2017 at The Abbey church situated in Montalcino valley, Tuscany, Italy.

At the time of their marriage, Kate wore a beautiful Valentino gown and Anito Ko jewelry on her neck, and her groom was ideally suited in a black tuxedo. Moreover, they had 150 wedding guests at their ceremony.

After their nuptial, the couple also invited their friends and family relatives at their wedding reception, which was held at the Rosewood Castiglion Del Bosco resort.

The married pair are lovers from a decade and are enjoying quality time. They previously had an on and off relationship for more than two years. But, they later reconciled their relationship in January 2014.

After two years, they got engaged on 2nd May 2016. Justin gave her a mesmerizing surprise with a big diamond ring on the red carpet of 2016 Met Gala of the Metropolitan Museum of Arts' Costume Institution. Since then, they are living their marital life joyfully.

Upton and her spouse, Verlander announced that they're going to welcome a baby girl shortly a year later of their marriage in early 2018. Later, Kate gave birth to their beautiful daughter, Genevieve Upton Verlander on 7th November 2018. At the time of delivery, Upton was 26 years old.

As of now, the pair are happy to raise their child and often went on vacation in exotic places with their newly born daughter. Recently, they celebrated their baby's 1st birthday on 7th November 2019 and posted on Instagram as well.

Criticism over Upton's Religious Beliefs & Controversy about Her Nude Photos

American model, Upton raised her voice over the religious beliefs during a photoshoot for the cover of Sports Illustrated in 2013. At that time, she wore a cross necklace, which means a lot to her faith in God. Eventually, someone joked about her cross and took the necklace, questioning, "Why are you wearing a cross" during the shooting time.

Upon the modeling shoot, Kate said she was felt heartless and talked about the professional works where she was treated unprofessionally because of her religious beliefs. Nevertheless, she later inked a cross tattoo on her finger from inside.

Meanwhile, Kate further faced a big problem after a hacker hacked her email accounts and leaked her edited nude photos in 2014. Similarly, some other high-profile personalities like Jennifer Lawrence, an actress, and Hope Solo, a soccer player's pictures were also leaked on the internet.

After the incident, an Illinois-based hacker, Edward Majerczyk was found guilty for the attempt of hacking Upton and other women's email addresses. Furthermore, he was pleaded at District Court, located in Chicago, Illinois.

American model, Upton has a total fortune of $20.5 Million which earns from her modeling works. Back in 2012, she collected a paycheque of $515 Thousand, but later in 2014, she successfully gathered around $7 Million through the modeling career.

On the other hand, Kate's husband's net worth is $95 Million and earns $33 Million annually from his $66 Million contract with Houston Astros from 2020 to 2022. As of now, his total MLB career earnings are upto $229,366,000. Similarly, Chris Shaw and Brandon Drury are also highest paid players in the MLB payroll.

The beautiful pair, Kate and Justin are enjoying quality time in their lavish habitation situated in Beverly Hills, California. They bought their rooftop for $5.5 Million in 2016, which consists of five bedrooms, and six bathrooms.

Their accommodation also features a tennis court, a hot bathtub, a swimming pool, a master bedroom, a big dining room for guests. Their home is situated near the house of Gene Simmons, Marjorie Goodson, and Vin Diesel.

The Other Woman actress, Kate is fond of loving animals and owns a boxer breed dog, Harley. On 1st May 2018, Kate adopted the dog from the animal shelter center and posted a picture of their pet dog.

As a fashion model, Upton has done several endorsements for many popular brands. She is currently modeling for her health-related fitness program, Strong4Me Fitness. She also shares many picture on her social accounts while she was endorsing new cosmetic products for women.

Kate recently posted a picture on Instagram while she was promoting an Italian clothing brand, Gucci for women on 4th December 2019. She also collaborated with many luxury brands like J Brand, CELINE, Balenciaga, and MANNING CARTELL.

Kate then appeared as Bernice in the slapstick comedy movie, The Three Stooges in 2012, which earned $54.8 Million against the production budget of $30 Million. She further featured in the comedy film, The Other Woman, where Nick Cassavetes gave her directions, alongside Virginia Cassavetes. She also portrayed in many movies, including The Layover and The Disaster Artist.

Check out the trailer of The Other Woman

Kate guest appeared in an episode, Bug in Mouth Reporter of the TV show, Tosh.0 in 2011. She, moreover, starred in the late-night variety show, Saturday Night Live in 2012. Similarly, her other television works are Lip Sync Battle, RuPaul's Drag Race, and Robot Chicken.

If You're Interested In Reading, Then Visit Married Celeb!!! Where You Can Find Amusing Biographies & Articles