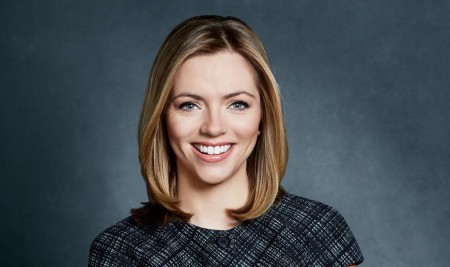 The 33-year-old Kayla Tausche is an on-air correspondent for CNBC based in Washington, D.C. bureau, where she covers the stories on the intersection of government and business. She can be seen on CNBC's digital platforms and serves as a fil-in anchor for the network's Business Day programming. Kayla worked as a co-anchor for Squawk Alley from May 2, 2014, until April 2017, where one of the host as of now is Carl Quintanilla.

The graduate of the University of North Carolina, Mrs. Kayla Tausche, is a happily married woman. She and her husband, Jeffrey, are proud parents of a lovely daughter.

Happily Married To Her Husband

The gorgeous reporter, Kayla McCall Tausche, is married to her husband, Jeffrey Jacob Izant. They exchanged their wedding vows on April 11, 2015, at the Cathedral of Christ the King in Atlanta. Msgr. Francis G. McNamee, a Roman Catholic priest, officiated their wedding ceremony.

Tausche and Izant has been married for over four years as of 2019 and is happy with their marital solidarity. Her spouse, Jeffrey, works as a law clerk in Brooklyn. Previously, he worked for the United States District Court for the Eastern District of New York with chambers in Brooklyn.

Kayla and her husband never miss any chance to show their love for each other on social media. Kayla is active on her Instagram account and she often praises her husband for his support and love.

Parents Of A Lovely Daughter

On April 14, 2018, Kayla took to the Instagram account to wish her husband their third marriage anniversary and also hinted a baby coming their way. Their happiness doubled when Kayla gave birth to a healthy 7 pounds baby girl. Their daughter, Catherine Clancy Izant was born on September 12, 2018.

Further, on September 12, 2019, on the occasion of her daughter's first birthday, Kayla shared an adorable picture on her Instagram.

Kayla shared her happiness with her followers via Instagram with the caption:

"Our world was turned upside down and right side up on Friday night... CeCe Izant, you are the picture of perfection and we love you more than words can say! Catherine Clancy Izant, 9/7/2018, 7lb 2oz."

Tausche and her law clerk husband manage to spend time with their daughter despite having busy schedules.

The renown political reporter for CNBC, Mrs. Kayla Tausche, has a net worth of $3.5 million as of 2019. The source of Kayla's wealth comes from her profession as a broadcast journalist. She has been serving for CNBC since 2011.

Tausche began her career at the Associated Press and has worked in London, Brussels, and New York. Her rise at CNBC is often compared to retail reporters Courtney Reagan and Leslie Picker.

Further, Kayla earns an annual salary of over $165,000, and as a prominent news anchor and finance analyst she receives a hefty sum of income.

Some of her notable works include the historic Brexit vote, Facebook, Twitter, and Alibaba IPOs, the Occupy Wall Street movement, the MF Global bankruptcy, and the News Corp. phone-hacking scandal.

The above article is about CNBC's broadcast journalist, Kayla Tausche. To know about your favorite star, follow marriedceleb.