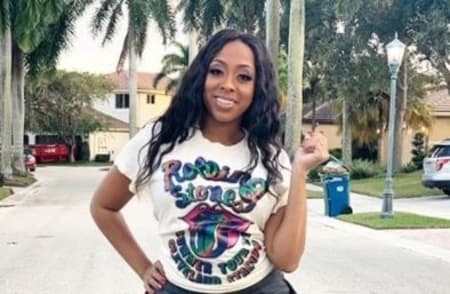 Kijafa Vick is the wife of a famous former NFL Player, Michael Vick. The couple is together through all the challenges and their bond is still strong. She stood still holding the hands while Michael was facing the charges for dogfighting. The lovely duo appeared in a TV show of VH1, Baller Wives as well.

Not just a Wag, She is also an entrepreneur and a producer. Besides that, she is a proud mom of three children. Kijafa was born on December 15, 1981, in Philadelphia, Pennsylvania as Kijaha Frink. After completion of her High school, she attended Hampton University, Virginia.

Kijafa is together with Micheal since 2002 after meeting in a Club. The two went on to walk down the aisle in June 2012 in Miami's Fountain Bleu hotel. Lavish wedding costs around $300,000. She is one of the famous wags like Dixie Brubaker.

The dazzling ceremony was attended by almost 300 peoples from both sides. Kijafa's mother had passed away just a month before the wedding so, it was a bit emotional for the bride as well. The couple shares three children together.

Michael also has a son but he is the child from his high school girlfriend, Mitez. The pair had their two daughters, Jada(15) and London(12), before the marriage. The couple welcomed the youngest member of Vick's family, Michael Jr., in November 2017.

Does Michael have an extra-marital affair?

If we follow the rumors and news in the social media, in January 2018, a video went viral in which a man, who looks like Michael is found in a hotel room.

A friend of the girl is supposed to have shared the video. This is not the first time that such rumors have been spread in the media. Each time a rumor comes ahead, Kijafa is the first one to respond.

How rich is the wife of a Football Player?

Kijafa Vick has a net worth of $1 Million as per online reports. She is the founder of the fashion website PnkElephant. What's more to that is, she recently launched a hair extension brand MyHairCloset. Another Celebrity Wife, Elise Tate, the wife of NFL player, Golden Tate, who has a net worth of $100,000.

Her Husband, Michael Vick, has a net worth of $16 Million. The two have been living a lavish and peaceful life as of now. As of now, the couple lives in a $1.32 Million house. The house has seven bathrooms, five bedrooms, a pool, a coffee bar, and a home theater.

The 39 years old entrepreneur is an active social media user. She keeps updating her social media accounts with her post from the vacations and family functions. As of February 2, 2020, Kijafa has a total of 192,277 Followers in her Instagram account and 10,542 followers in Twitter Account.