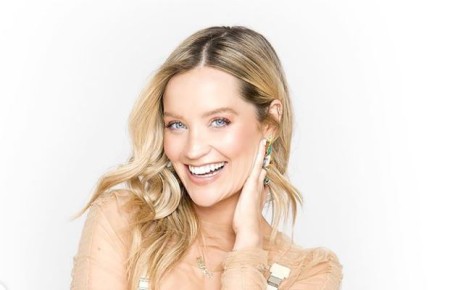 Laura Whitmore is an Irish television presenter, model, and actress. She is mostly popular for hosting British tv shows such as I'm a Celebrity-Get Me Out of Here! and Survival of the Fittest. She began hosting another British dating reality series, Love Island in January 2020. Likewise, Whitmore began filming Celebrity Juice as the new team captain in September 2020.

Laura was born on May 4, 1985, in Bray, Ireland. She was born to mother, Carmel Whitmore and father Sean Mclvor. Laura has two half brothers. She attended Loreto Bray and upon graduation received a Culture Student of the Year award. Laura studied at Boston University in the U.S. for a year and has studied journalism at Dublin City University.

The 35-year-old tv personality is engaged to her partner, Iain Stirling, a Scottish comedian, writer and tv presenter. Iain popped the question in April 2020 while they were on a vacation in South Africa. He gave Laura a beautiful yellow diamond ring which was later spotted by the paparazzi. Meanwhile, the couple is planning to tie their wedding knot soon.

So, how they met and when they begin dating? Well, Laura first met her future fiance in 2016 at an ITV party through their mutual friend, Ore Oduba. For your information, Oduba was a fellow contestant alongside Laura on Strictly Come Dancing.

After having an introduction, the pair started dating in 2017. Further, Laura tried to stay low-key but the Love Island host confirmed her affair in August 2017.

An insider source told Laura and Iain have never been happier. The pair has been living together in North London. Iain has been hosting the ITV2 reality series, Love Island since June 2015.

The 32-year-old, Iain is best known for appearing in multiple television programs. He appeared in the Comedy Central series, Drunk History. He also did the voice over for the BAFTA awards in 2018.

Stirling earned a BAFTA nomination for Best Children's Presenter in 2014. Likewise, he appeared as a comedian on the show, Comedy Bus in 2019.

The lovely television host dated a few men before she became the fiancee of the voice-over artist. Before meeting Iain in 2016, Whitmore had a brief romance with the Games of Thrones actor, Richard Madden. Now, let's know who Laura has dated.

In 2010, Laura began dating model, David Gandy but shortly they split. Then she began dating Coroners frontman, Danny O'Reilly on an off for two years. They split in 2012 and as per Laura that was the most difficult time in her life.

The beautiful model dated Last Shadow Puppets singer, Miles Kane in 2013 but their romance didnt last long. In 2014, Whitmore was seen with Scottish singer, Paolo Nutini on several date nights. However, she never confirmed the romance.

The Irish TV personality, Laura Whitmore has a net worth of $15 million as per celebritynetworth. She has been working in the entertainment industry since 2008 as a model, actress, and tv host. Laura earns an impressive six-figure salary of $776,000 per series as Love Island's presenter.

Laura gives a tour of the Love Island Villa!

Meanwhile, her fiance, Iain earns around $130,000 per series as the voice of the show. Recently, she joined Celebrity Juice as the new team captain, where Caitlyn Jenner announced to make an appearance.