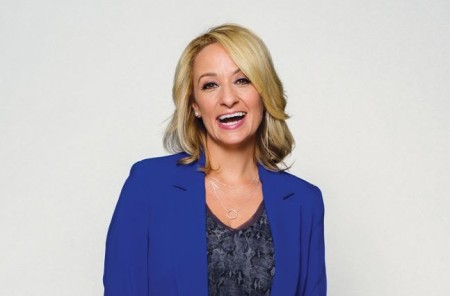 The Emmy award-winning broadcast meteorologist Lauryn Ricketts is best known for her work on NBC4 Washington and WTOP-FM. She earned national recognition for her forecasting capabilities for 'Snowmeggedon.'

Lauryn Ricketts was born on August 26, 1983, at Winchester, the United States. With over a decade of experience, Ricketts has worked for some major television stations. Further, she is a married woman and is soon going to be a mom. Who is her husband, and how long have they been married?

The 36-year-old weather forecaster, Lauryn Ricketts, is married to her husband, Eric Earnhardt. Her spouse is a retired Marine Corps Major who was deployed to Afghanistan. So, how long have they been married?

Ricketts and her partner, Eric tied their wedding knot on December 30, 2017, in Brooklyn Arts Center, Wilmington, North Carolina. Just after two weeks of their wedding, Eric was deployed. Lauryn being a military wife, says it's not easy but has learned to cope anyways.

Lauryn and Eric knew each other since high school, but their romance began after several years. They officially began dating around 2012 after meeting again at a friend's wedding. At the time, Lauryn had just broken her 10-year relationship, while Eric came back from overseas.

Their wedding ceremony was performed in a classic manner. The husband-wife duo being fans of '80s music played music videos from the '70s and '80s on a huge screen. Most of the attendees were stunned by the grand ceremony.

The bridegroom's from his battalion did join the valuable day. Lauryn had worn a white color sleeveless gown. The wedding ring was made of diamonds cut in the shape of a hexagon.

Lauryn and her spouse expecting a child?

As of 2020, the pair is living a happy married life, and even more, they are soon going to be parents. On January 19, 2020, Ricketts announced her pregnancy via her show. Further, she thanked her fans and NBC crews for their support as well.

Lauryn happily shared her four-month pregnancy news via Instagram on January 22, 2020. She and Eric are expecting a baby boy and their happiness at the moment is above the clouds.

How rich is the Meteorologist, Lauryn Ricketts?

Lauryn Ricketts has a net worth of $500,000, which is similar to Felicia Combs. She has been accumulating all her net worth through her career in television. Lauryn started working in the Television from 2003.

In the United States, the average salary of a Meteorologist is about $55,000 annually. Lauryn has earned a lucrative sum of money in her career of almost two-decade. She loves animals and owns a cat as well.

As per After  WTOP, graduating from Randolph Macon College in Ashland, Virginia, with a degree in environmental studies, Lauryn started her career with a three-year internship cementing her journalism career. She was interested in Weather and Atmosphere from an early age.

She started working at WTTG along with Jim Acosta in Washington before moving to WHSV in Winchester as a Chief Meteorologist. As of now, She is working with NBC4 Network for Storm Team 4 show and is regular with 103.5 WTOP radio on weekday mornings.

Click on Married Celeb for more details on American Meteorologists.