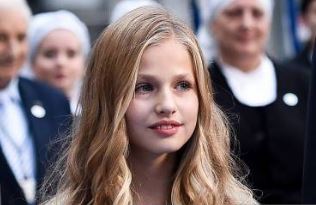 Facts of Leonor Princess Of Asturias

Body and Relation Status of Leonor Princess Of Asturias

Leonor, Princess of Asturias, is the eldest daughter of King Felipe and Queen Letizia. Being the eldest in the family, she is entitled to inherit the throne of Spain. Later if she arises, then she will be awarded to be Spain's first queen regnant after Isabella II.

As a primary inheritance for the throne, she is already a nominal chairwoman of the Princess of Girona Foundation and Princess of Asturias Foundation. Though being young age, currently, all of the functions are maintained by her father.

Let's take a look at her personal life and details.

Is Leonor, Princess of Asturias dating anyone?

The fourteen-year-old Princess of Asturias hasn't involved in any sort of dating game. Her relationship status is still marked as single; however, it will undoubtedly change in the future.

Even she is too young to be in any sort of relationship, and there are lots of protocols for the princess to date any pedestrian. Further, she is busy in developing her inner confidence and seeking out news things in her life rather than involving in the relationship game.

Additionally, she loves hanging out with her friends and is often seen traveling various places with her mates and family. She is very close with her wonderful sister, Infant Sofia of Spain. The two are often spotted together, and it is believed that both enjoy one another companionship very much.

Parents are King and Queen of Spain

As we all know, Leonor is the daughter of the King and Queen of Spain. The two shocked the whole world with their unexpected relationship back in 2003. On 1st November 2003, their engagement took place after King Felipe proposed Letizia with a diamond ring.

Within a year, the two tied wedding knots on May 22nd, 2004, in front of the whole world. The ceremony took place at Cathedral Santa Maria La Real de la Almudena in Madrid, Spain. It is known that over 1200 important guests were present at the wedding, and more than 25 Million people witnessed the ceremony alone in Spain.

As of now, the pair are married for more than fifteen years and still maintains a healthy relationship. There're no rumors regarding the pair's external marital affairs and relationship.

Further, Queen Letizia was previously married to Spanish writer, Alonso Guerrero Perez back on 7th August 1998. However, they enjoy just several months of togetherness and later got separated in 1999 in a mutual understanding.

How rich is the princess Leonor?

The net worth of the princess hasn't been estimated yet. However, it is believed that it is over $1 Million. Although she hasn't engaged in any sort of profession due to her royal background, she undoubtedly inherits some amount of fortune for her future without a doubt.

As talking about her parents, they are massive money makers. Her mother, the Queen of Spain, has whooping $10 Million of net worth. She used to be a journalist and news anchor in the past and used to earn over $100,000 annually.

In November 2019, Disney Princess delivered a brave speech at the Princess of Girona Foundation awards in Barcelona. Her father at the time faced anti-royal street protests.

Similarly, her father, King of Spain, has a net value of $20 Million. He earns $267,447 annually only in salary after he cut off his salary by 20% back in 2015. Further, the royal family is luxuriously living a lavish lifestyle.

Stay tuned to married celeb to know more about celebrity kids and their parents.