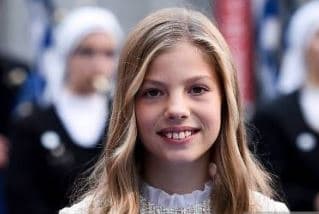 The second child of Queen Letizia and King Felipe VI, Infanta Sofia is one of the popular celebrity kids. Despite the young age she has grabbed a large media attention and fan following. Currently, she is reading at the Santa Maria de Los Rosales school which is located at Madrid.

The twelve years old, Sofia was born on 29th April 2007 at Ruber International Hospital, Madrid, Spain. Her birth was announced by the family to the media via SMS. Her full name is Sofia de Todos Los Santos de Borbon Ortiz. Further, her eye is blue in color.

Being the daughter of the Spanish throne she has received the style of Her Royal Highness and the title of Infanta. Let's dig into her personal details.

Is Infanta Sofía of Spain (Sofía de Borbón) Engaged in any dating game?

Her Royal Highness, Sofia is too young to be engaged in any dating games. So, her relationship status is still marked as single. Maybe in the future, we can see her in the relationship and choosing her future husband.

However, as of now, she is busy in her studies. Further, she loves spending time with her friends and family. Especially she loves hanging out with her elder sister, Princess Leonor.

It's a matter of fact that Sofia's parents are the King and Queen of Spain. The pair got engaged on 1st November 2003 after her father proposed mother, Letizia with a 16-baguette diamond ring.

On 22nd May 2004, the duo exchanged the wedding vows in front of the whole world at Cathedral Santa Maria La Real de la Almudena in Madrid. It was believed that over twenty-five million people in Spain alone watched the royal ceremony. More than 1200 VIP guests attended the wedding.

As of now, the royal duo is married for more than a decade and loves one another companionship very much. Further, she has one elder daughter named Leonor, Princess of Asturias who was born on 31st October 2005 and she is currently the heir to the Spanish throne.

Sofia, on the other hand, received the title of Infanta not princess because she sits on the third spot of the crown succession.

The Net Worth of Infanta Sofia of Spain

Sofia's net worth hasn't been estimated yet. Or we can simply say that she is too young to engage in any kind of profession. However, regarding her parents, they are super rich and has a high amount of net worth. Her father, Felipe has a net worth of over $20 Million.

In 2015 he cut off his 20% salary to help the needy people around Spain according to CNBC. As of now, he receives an annual salary of $267,447. On the other hand her mother, Queen Letizia was a renowned journalist and has the fortune of $10 Million.

Previously as a journalist for various news company her annual estimated income over $100,000. As of now, the family of four is living a luxurious lifestyle in a very lavish and royal way.