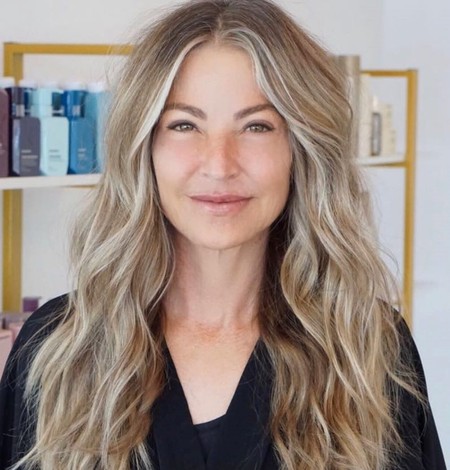 Lisa Bonder is a retired American professional tennis player. Moreover, she has won four singles titles on the WTA circuit and also reached a highest ranking of no.9 in August 1984. She became a professional tennis player on June 21, 1982. Despite her sports career, Lisa is best known for her relationship. Furthermore, she was married twice in her life and also have one relationship.

Additionally, she rose to fame as the ex-wife of billionaire Kirk Kerkorian, who was 48 years older than her. Apart, Lisa is the mother of two children from her married life and relationship. What is her current relationship? To know more about her than read the whole article written below.

Well, Lisa married billionaire Kirk Kerkorian in 1999. Despite having 48 years age gap, the duo walked down to the aisle. She married Kirk, a businessman, investor, and philanthropist as a second husband. But, their married life ended just after 28 days. Some sources claimed that she married him only for his money.

After the divorce, Bonder fell pregnant when she was with Kirk and thought that Kirk was the father of Bonder's child. Later, she gave birth to a baby girl named Kira Bonder, on March 9, 2000, in Los Angeles, California.

Moreover, Kerkorian allegedly paid $100,000 a month as a child for supports and force his daughter to set up a $7 million trust. But later, after a DNA test, Kerkorian finds Kira is not his daughter. Unfortunately, Kirk died on June 15, 2015.

Who was Bonder's Daughter's Father?

After, the DNA test, it was clear that Lisa's daughter Kira is the daughter of Steve Bing. Bonder was in a romantic relationship with Steve, who was an American film producer, philanthropist, and businessman. Well, Bonder and Bing were unmarried couples.

But, in the late 90s, it was pretty sure that they were in a romantic relationship for a few months. However, they broke up before Lisa married to Kirk Kerkorian. When the truth was revealed Steve openly accepts Lisa's daughter also gave the love of her father since then.

Yes, It true that Steve Bing, who is an American film producer, philanthropist, and businessman is no more on this planet. Moreover, he died at the age of 55 after a long battle with depression.

On June 22, 2020, Monday, he died by jumping from his 27th-floor apartment in the Century City neighborhood of Los Angeles, California. Steve was in a relationship with actress, Elizabeth Hurley. He had a son named Damian Hurley from Elizabeth's side.

The former professional tennis player, Lisa was married for the first time with Tom Kreiss. They walked down to aisle on January 10, 1988, and also changed her surname to Bonder-Kreiss. However, the couple relationship didn't last for long and ended their relationship.

Yet, we don't have much information when did they divorce each other. But, some sources claim that she divorce Tom to marry Kirk. Lisa shares one son named Taylor Jennings Kreiss with her ex-husband, Tom. Both of them has moved on their life and currently living a happy life with their respective family.

Lisa Bonder has earned a decent amount of money from her career as a tennis player. But, her exact net worth figure is yet to be published. However, we can only guess that her net worth might be around $3 million as of 2020. Besides, Lisa also earns the prize money of $212,395 from her tennis career.

Lisa Bonder was born on October 16, 1965, in Columbus, Ohio, USA. Moreover, she is the daughter of Seth Bonder(father), an American engineer, and Julia Bonder(mother). Later, she moved to Saline, Michigan with her family.

However, her siblings' and educational information is still missing. She holds an American nationality and belongs to white ethnicity. 54-year-old, Bonder started her professional tennis career as WTA from 1981 to 1991. However, she is best known for her relationship than a career.