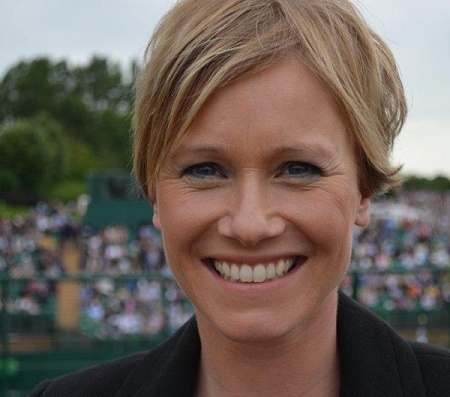 Lizzie Greenwood-Hughes is an excellent, versatile, award-winning English television presenter with a good career in television and radio sports, factual, news and entertainment. As of now, she serves for Sports News on the BBC News Channel and the BBC Weekend News as a presenter.

BBC journalist,  Lizzie Greenwood-Hughes was born in the United Kingdom but has concealed the actual birthdate so it's really difficult to predict her current age. Along with this, there are no details about her parental background and as well as early life. Hughes holds English citizenship and belongs to white ethnicity. As far as her education, she studied at Salisbury College of Art in film and photography, which became later Wiltshire College.

In 1995, Hughes started her career as a Regional Station Assistant with BBC South. Then she started presenting for the BBC on the children's news program ' Newsround ' after a period of doing numerous employment on BBC television. Likewise, Greenwood also co-presented the show's 30th Anniversary edition with original presenter John Craven at BBC.

Lizzie then went on to present Sportsround on BBC Two in 2005, with co-host Jake Humphrey. Her extensive and varied curriculum spans 10 years in front of the camera, including The Football League Show, Newsround, Sportsround, Weird's Wonderful World, the BBC News Channel, and Countryfile. Besides, she also worked on many high-profile programmes for BBC Sport including The Football League Show, The Grand National and Winter Olympics in Vancouver. Besides, she has also worked with other journalist like Karthi Gnanasegaram and Tina Daheley.

As well as BBC reporter Greenwood Huges has hosted the NatWest Cricket programme and  PLTV (Premier League Television), Wimbledon and The Open Golf for IMG in 2012 and 2014. For more career information, visit her personal blog on BBC official website.

Who is Lizzie Greenwood-Hughes ' Husband? Children

The TV presenter and beautiful woman, Lizzie Greenwood-Hughes is a married woman. She tied the wedding knot to her longterm boyfriend turned husband Geraint Hughes. Her partner is an also from the journalism field who is a former BBC News Sports Correspondent but later joined Sky Sports.

Greenwood and Geraint are happily married for a long time. However, they are living a low key married life so there is no exact date when they walked dowm the wedding aisle. As per some wiki, the wedding ceremony was held in St. Peter and St. Paul Church, Cattistock, Dorset, Britain.

Besides this, Greenwood-Hughes is very active in keen amateur sportswoman. Well, she once played a mixed team for England and still plays for her local side of the club. She jogs frequently with her dog Zebedee, a rescue lurcher, and finished the London Marathon.

Well, the couple shares two children together from their long term marital relationship. For now, Lizzie is living a very blissful life with their husband and kids. However, there are not given any details about her children identity.

For now, the couple clearly hasn't declared whether they're blessed with kids or not. Therefore, we can predict, their offspring is still to be welcomed.

BBC presenter, Lizzie Greenwood-Hughes has concealed the actual amount of her net worth, but it is predicated to be in millions of dollars. Well, Hughes is active in the broadcasting field for a long time decade as an journalist. Hence, she has accumulated a high amount of money and her income source is her journalism career.

As of now, Greenwood-Hughes is currently working on Sports News BBC News channel and the BBC Weekend News as a presenter. With decades of experience, she surely draws a huge salary from her current network BBC.

Well, Lizzie is an experienced and accomplished host in live presentations, recordings and studios. She also performs voice over, private appearances and hosting live events.