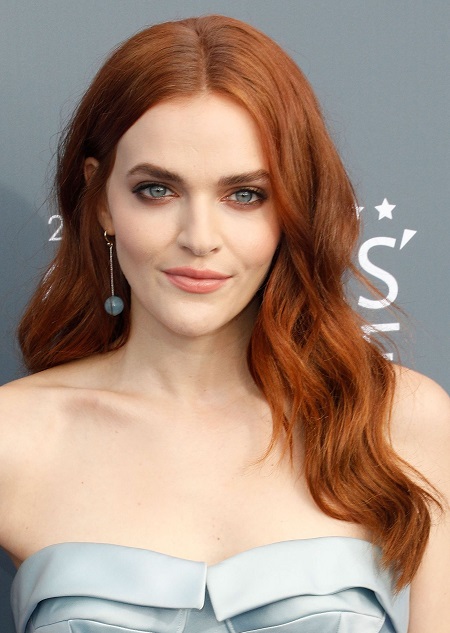 Madeline Brewer is an American actress who initially received people's attention after starring in Emmy award-winning series Orange Is the New Black (2013) as Tricia Miller. More to that, she is also known for roles in the Netflix horror film Cam as Alice/Lola and as Miranda Cates in horror n Netflix series, Hemlock Grove (2014–2015).

She was born on 1 May 1992 in Pitman, New Jersey, the United States as Madeline Kathryn Brewer. She is the daughter of actor, Laurie Brewer, and musician Mark Brewer. Madeline has one brother. She graduated from the American Musical and Dramatic Academy in New York City. In high school, she was crowned 55th annual Miss Pitman in 2010 at the age of 18.

She Has A Boyfriend

Yes, it is very true. The beautiful TV star Brewer is officially off the market. As of now, she is a lovey-dovey love relationship with her boyfriend, Spencer Neville. He is an actor and producer.

Aged 28, Madeline, and her lover, Spencer has been sparking their love life for more than three years. They started dating in December 2016 and is still going high. Moreover, the couple mostly spends their holiday time together and share their beautiful hanging out images on their IG accounts.

Recently on March 22, 2019, the 5 feet 3 inches tall actress posted the photo of herself and her another half, Neville in the midst pandemic on her Instagram account. She wrote that she hasn’t seen her lover in 4 weeks but it feels like 101 years FaceTime her.

Besides it, Madeline was rumored to be dating a singer, Nick Jonas after their intimate dinner Thursday at Via Veneto in Santa Monica in 2018. But she quickly shut down the rumors saying that they are just friends.

As a well-known actress, Madeline Brewer has accumulated an estimated net worth of $500 thousand as of 2020. The primary source of income is her professional acting career.

Now, Brewer stars in the Hulu web series The Handmaid's Tale (2017–present). So, as per her salary, she must be receiving $250,000 per season as a regular cast member. Likewise, her starred 2019's film Hustlers has grossed $157.6 million worldwide against the budget of $20.7 million.

Apart from acting, Madeline has been appearing in Toyota TV commercial since 2015. Also, she has done photoshoots for several magazines including Los Angeles' based Flaunt Magazine and few others. Hence, she must be living a rich lifestyle in the Mar Vista neighborhood of Los Angeles.

Portrays As Janine In The Handmaid's Tale (TV series)

Brewer who made her TV debut by dark comedy web series, Orange Is the New Black in 2013 landed the main role in Hulu's TV series, The Handmaid's Tale. The drama is originally released on April 26, 2017.

Well, she played the character of Janine/Ofwarren/Ofdaniel/ Ofhowrad. Janine is a Handmaid who entered the Red Center for training at the same time as of June, which is played by Elisabeth Moss. The shows cast members include Bahia Watson as Brianna / Oferic, Max Minghella as Commander Nick Blaine, Ann Dowd as Aunt Lydia, Nina Kiri as Alma / Ofrobert, and others.

Before that, Madeline also started in several TV series named Hemlock Grove, Stalker, Grimm, Black Mirror, and The Deleted. Her latest TV show is Acting for a Cause. Similarly, her movie credits are Hedgehog, Flesh and Blood, Braid, Cam, Captive State, and Hustlers.