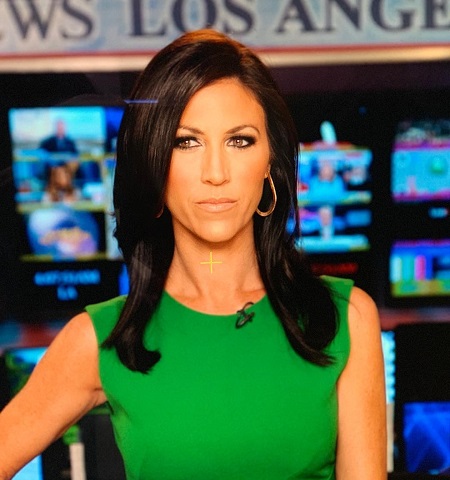 Marci Gonzalez is an American television reporter who is now affiliated with ABC News as a news correspondent. Presently, she appears for the network for many programs like Good Morning America, ABC World News Tonight, America This Morning, and World News Now.

She was born on November 25, 1982, in Denville, New Jersey as Marci Renee Gonzalez. She is the eldest daughter of Cathi and Francisco Gonzalez, who was immigrated from Montevideo to the USA. Further, she has two younger siblings named Christina Isabelle, born on March 6, 1985, and Richard Frances, born September 20, 1992. So far, she holds American citizenship and is of mixed ethnicity.

Yes, Marci who attended the Atlantic High School, has not tied the knot with anyone until now. But unfortunately, she is off the market. She has found a boyfriend Jory Rand who plays a role not less than of a husband. He is now working as a news anchor/reporter at abc7Eyewitness.

Aged 37, Gonzalez and her spouse to be Jory has been sparking their love life for about a year. It means they started dating in early 2019. Since then, the happy unmarried pair has maintained making time for each other despite their busy schedule. Similarly, they mostly share cute moments and beautiful hanging out pictures of them via their social media accounts.

Recently she wished her boyfriend on 2020's Valentine's day special, saying that she is so lucky to call the funniest, sweetest guy she knows. However, Marci and Rand have not mentioned yet when and where they are planning to get married.

Before started love romance with new lover Jory, the 167 cm tall ABC reporter was dating her former boyfriend, Will Carr. He is also a correspondent for ABC News. They started a love relationship in mid-September 2016. But later they parted their ways in around 2018 privately.

Yes, the beautiful journalist Gonzalez who is a graduate of the University of Central Florida became of the mother of one child. She and her partner of one year, Rand, gave birth together to their firstborn son Brooks Henry Rand on May 28, 2020.

She introduced her new baby Brooks by posting the picture of him on her Instagram wall on the 30th of March, saying "We are so in love and excited to bring him home today". As per her post, he weighed 7lbs, 2oz, and was 20.5 inches long at his birth time.

Before welcoming their son Brooks, the couple made the announcement that they were expecting a child on Christmas special day in 2019. They posted the image wearing a matching Santa cap on their respective Instagram page with the caption "Santa was very good to us this year".

Working in the broadcasting field for 15 years, Marci Gonzalez must have earned an impressive amount of money. As of early August 2020, her total impressive net worth is assumed to be more than $1 Million, which is alike to Michelle Franzen and Rob Nelson.

For now, Gonzalez is serving for an ABC News as a news correspondent for about seven years. As per online tabloids, the employees of ABC News makes the salary in the range from $78,519 to $150,914 per annum. Thus looking at her career graph, her annual income is around $80,000.

Her biggest stories at ABC include the Boston Marathon bombing, the 2013 Paris attacks, Fidel Castro's death in Cuba, and the final days of Nelson Mandela's life in South Africa. Likewise, she started her reporting career in 2005 by working at News 12 Networks as an anchor and reporter in The Bronx.

She further served for WPTV-TV as a reporter and weekend anchor in West Palm Beach, Florida. During her time at WPTV-TV, she covered the devastating Haiti earthquake in 2010.