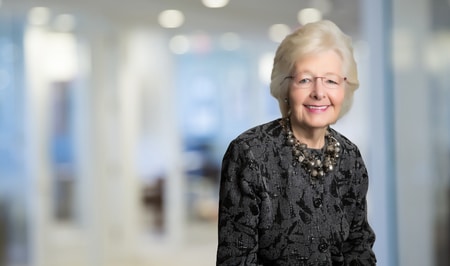 A native of South Africa, Margaret Hilary Marshall, was the 24th Chief Justice of the Massachusetts Supreme Judicial Court. The first woman to hold the chief justice position retired in 2010. Further, in 2017, Marshall was elected to the American Philosophical Society.

The 75-year-old, Hilary was born on September 1, 1944, in Newcastle, South Africa. She graduated from Witwatersrand University in Johannesburg in 1966. Shortly after her graduation, she worked as the president of the National Union of South African Students for three years.

In 1969, Margaret pursued her Master's Degree in education from Harvard University, the same university as Jay Newton-Small and Karoun Demirjian, and a law degree from Yale University in 1976.

Margaret was married to an American public intellectual and journalist, Joseph Anthony Lewis, in 1984. She was married to her husband for 29 long years. Further, she is the mother to 3 stepchildren from her husband.

On July 21, 2010, the South Africa Immigrant decided to retire from the court as she wanted to spend more time with her ailing husband, who was suffering from Parkinson's disease. Margaret lost her husband on March 25, 2013, due to renal and heart failure. The 75-year-old Margaret kept the sacred vow "In sickness and in health" exchanged with her husband and spent the remaining time with him until the very end of his days.

Margaret is the second wife to Anthony, who was the two times Pulitzer Prize winner for National Reporting. The Presidential Citizen Medals Winner was previously married to Linda J. Rannells on July 8, 1951.

The couple had three children together but got divorced in 1982. Margaret hasn't been involved in any other relationship after the demise of her husband.

Margaret worked as the Associate Justice of the Massachusetts Supreme Judicial Court for three years and as the Chief Justice for 11 years. As per sapling, the salary of Chief Justice in the United States is $223,500 in 2010. Working for more than a decade in the Massachusetts Supreme Judicial Court, she must hold a huge sum of money from her work.

Marshall's Late husband Anthony was a legal journalist and public intellectual in the United States. The average salary of a journalist in the US is $40,733 annually. So, after the demise of Margaret's beloved husband, she must have inherited his wealth.

Hillary started her legal career in private practice as an associate and a partner at the Boston law firm of Csaplar & Bok from 1976 to 1989. The Chief Justice continued her private practice of law as a partner at the prominent law firm of Choate, Hall & Stewart in Boston from 1989 to 1992. She served as the president of the Boston Bar Association and a general counsel to Harvard University.

Being the first woman to hold that position on the Court in its more than three hundred years history, she boosted the spirit of other female law graduates to be determinant and never go for less than their capacity. Hillary Marshall authored about three hundred opinions and was involved in at least 900 other cases during her fourteen years service in the Court.

Since May 17, 2004, same-sex marriage has been legally recognized in Massachusetts, making it the first US state to issue a marriage license to same-sex couples. Honorable Margaret H. Marshall is the author of the landmark 2003 decision that made Massachusetts the first state to legalize gay marriage.

On March 4, 2003, the same-sex couple who were denied of marriage license filed legal action against the Massachusetts Department of Health to the Supreme Judicial Court. Previously on April 11, 2001, the Gay and Lesbian Advocates and Defenders (GLAD) had already filed the case on behalf of the plaintiff couple. Still, the jurisdiction decision was in favor of the Massachusetts Department of Health, misguided by prejudice.

The Court's decision was adjourned on November 18, 2003, with a vote of 4-3, the majority opinion-making it unconstitutional to deny same-sex couples the rights and privileges associated with marriage. Margaret wrote the majority opinion in the landmark case, Goodridge v. Department of Public Health. Former Chief Justice of Massachusetts is the prime reformer to this tremendously courageous decision.