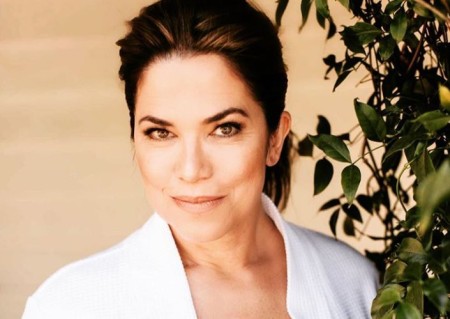 Melanie Smith is a formerly popular actress best known for appearing in NBC's sitcom, Seinfeld and CBS's soap opera, As the World Turns. Additionally, she also appeared on science-fiction series, Star Trek: Deep Space Nine. Smith has been longtime retired from acting. She worked as a certified yoga instructor and ran one of the country's top yoga studio. Smith is currently a life, wellness, and personal development coach.

Melanie Smith was born on December 16, 1962, in Scranton, Pennsylvania, USA. She is 57 years old as of 2020. Smith is the youngest of six children born to her parents. Her mother was a housewife, while her father was an executive for a oven cleaner company.

Melanie is a college drop-out but she took acting lessons from New York’s prestigious Neighborhood Playhouse. She is also an avid dancer. At 18, Smith choreographed live cabaret shows for Hugh Hefner's Playboy Corporation.

At 34, Melanie married Michael Eiden, who at the time was an entertainment lawyer based in Los Angeles. There is not much information available about their wedding, but Smith met her husband in the early 1990s and they married in 1996. But are they still together?

Melanie and her former husband, Eiden separated a long time ago but the details are unknown. However, they still have a good relation. On June 17 2017, the former spouses attended their son's high school graduation.

Melanie and her ex-husband, Michael Eiden share one child, a son named, Gideon Eiden. He was born in June 1999 and has graduated from Penn State University. On June 30, 2020, Smith shared a sweet birthday message to her son on his 21st birthday.

Further, Melanie is currently married to her husband, Burt. He often appears on Smith's Instagram. Likewise, Michael is also married to his second wife and has kids as well.

There is no exact information regarding Melanie Smith's net worth. She began her career at a young age and stayed in the entertainment industry for 20 years. Smith retired from acting in the early 2000s. At present, she is life, wellness, and personal development expert. However, Smith's estimated net worth must be at least $700,000 as of 2020.

Melanie's most memorable appearance was in Seinfeld where Charles Levin and Ali Wentworth also appeared in a few episodes. Other notable works include Days of Our Lives, Star Trek: Deep Space Nine, As the World Turns, Curb Your Enthusiasm, etc.

At present, Melanie earns somewhere between $47,983-$72,345 as wellness and personal development coach. Her brand "Well Lit Life" helps the client to manifest their life in a positive direction.

From Acting to Yoga and Wellness Expert

Melanie entered the entertainment industry in her teenage years. She began her career as a choreographer and then a model. Later, she jumped into television and her first tv role was of Emily Stewart on Days of Our Lives.

Smith's performance as Emily earned her a Soap Opera Weekly People’s Choice Award for Most Valuable Performer. Additionally, TV Guide named her as one of the "Ten Most Popular and Sexiest Women on TV." Further, she made her first nude appearance in the movie, The Baby Doll Murders.

Currently, Smith practices as a wellness and life expert. She has studied behavioural finance and entrepreneurship and has over a decade of life coaching experience.