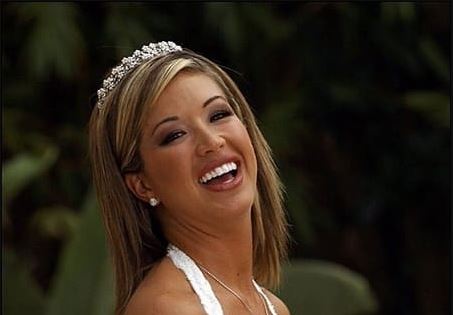 We've heard people become famous for their profession, but some people got people's attention just because of their connection with famed partners. Today this post is about Michelle Mangan, the wife of two-time MLB All-Star, two-time World Series champion Johnny Damon.

Born in the United States in 1971, Mangan is of White ethnicity and holds an American nationality. So far, there is no information regarding her family background in the media. While her husband, Johnny, was born on November 5, 1973, to the parents, Yome and Jimmy.

This beautiful woman Michelle and MLB player walked down the aisle on December 30, 2004, in front of 175 guests after two years of dating. The traditional wedding function was held at the Orlando Ritz-Carlton Grande Lakes resort.

In the big day, 42, bride stunned in a Vera Wang white gown and groom, 46, donned a black tuxedo. More joyously, the ring bearer and flower girl, respectively, were Johnny's children from a previous union, Jackson and Madelyn.

The baseball star’s pal, AC/DC front-man Brian Johnson, sang for their reception. Since the day, the newlyweds have been living a happy married for 15 years. So far, they frequently attend a variety of events and awards together.

In August 2019, during Season 4 of the Bravo (American TV channel) series Below Deck Mediterranean, Michelle, and her husband appeared as one group of principal charter guests.

Mangan and Damon welcomed their second daughter in 2008, after a year of their firstborn. The couple welcomed twin girls in June 2012 and, in April 2015, welcomed their fifth daughter.

Damon and Michelle, in 2016, had their sixth child, a son. The entire family currently lives in Windermere, Florida.

Mangan met Damon in 2002, one of the PEOPLE’s sexiest men of 2004 in a Houston restaurant. At that time, when he was a newcomer to the Red Sox, she was working as an office director for a talent scouting company in the town.

And the professional baseball outfielder says it was love for him at first sight, but it took a little longer for Michelle. He also claimed that at the first meeting, he was wearing all black and had very, very short hair.

''I've always been attracted to more exotic, dark-haired, tanned men,'' But I definitely thought he was cute."

Then, later on Easter Sunday, Damon proposed to Mangan with an 8-carat canary-yellow diamond on Martha's Vineyard. And Michelle says yes right away.

Tampa Bay Rays' star was previously in a marital relationship with his first wife, Angela Vannice. Likewise, this exes met for the first time during their college in the around early 1990s.

After a few years of a love affair, they exchanged the wedding vows in 1992  when Damon was just 19 years old. Moreover, from their conjugal, they had twins, one son and one daughter named Jackson Damon and Madelyn Damon.

Boston Red Sox heartthrob and his ex-partner had formally divorced in 2002 after one decade of unity. Damon and his wife Vannice used to live in Cresskill, New Jersey, while he was playing with the Yankees.

At present, Michelle Mangan enjoys her husband's income and earnings, just like another Hollywood's star wife, Stephanie Slemer. Well, her husband, Johnny David Damon, shares $60 Million net worth as of early March 2020 throughout his in Major League Baseball (MLB) career from 1995 to 2012.

During his MLB gigs, he had earned a hefty amount of money, just like Jessica Beltran's husband, Carlos Beltran. As of now, the whole family resides in $2.1 million, seven-bedroom, six-bathroom home in Windermere, Florida.

Damon's All Contract as MLB debut