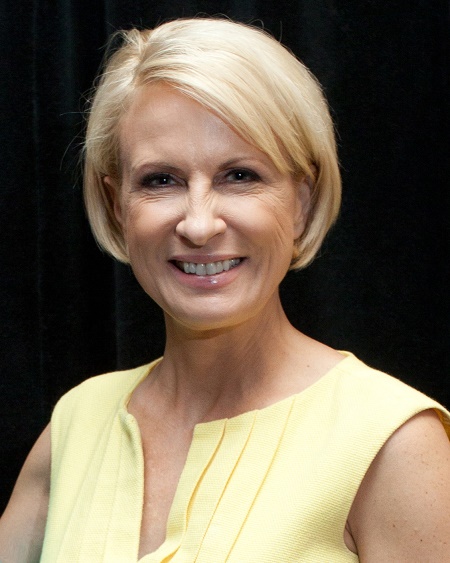 Mika Brzezinski is one of the well-known journalist and Talk show host from the United States. Along with a journalist, she is also an author and a liberal political commentator. Further, she is the current co-host of MSNBC's weekday morning broadcast show Morning Joe, alongside Joe Scarborough.

Mika, who once suffered from a failed relationship, is now living a blissful married life with her spouse, Joe Scarborough. Her partner, Joe, is a former US Congressman, who is currently working as a cable news host on MSNBC.

Just like Mika, her now-spouse also faced several failed marriages in his past. Together they have no children but shares from their past conjugal life.

The Morning Joe anchors shared the nuptial vows in November of 2018 in Georgetown at 5:40 P.M. The intimate Saturday wedding was held in front of the Constitution, the Declaration of Independence, and the Bill of Rights, officiated by Rep. Elijah Cummings.

The lovebirds' wedding venue was a surprise for every other individual. They held their ceremony at the houses the Constitution and the Declaration of Independence, where no wedding was conducted before and due to which they became the first pair who held their wedding at the location.

They, additionally, tied the knot in a private ceremony which was attended by only limited guests. Their guests included their closest ones, and also six children of the couple from previous marriages.

As per Mika's statement to Vanity Fair, the couple always wanted a small and simple ceremony, stating:

“We wanted it to be really small and simple and not what you expected from Mika and Joe. Everything we do is exposed, and everything felt exposed every step of the way, so we want this to be private until it’s over.”

Regarding their dress, the bride wore a white midi-length dress, which featured a sheer polka-dot lace. While the groom stunned in a black suit, which he teamed up with a white shirt and black tie.

Mika And Joe Got Engaged In France

The high-powered TV personality announced her engagement to her on-screen partner, Joe. Their engagement took place privately in May 2017 in Antibes, France, at the  Hotel du Cap.

The duo revealed the truth in an exclusive Vanity Fair that since 2007, both were already "work spouses." The pair, whose combatively sly chemistry as co-hosts of MSNBC's "Morning Joe" show, had often sparkled speculation for a while leading up to tying the knot.

MSNBC anchor was previously married to TV news reporter James Patrick Hoffer who known as Jim Hoffer. Mika, 52, and Jim, 55, shared the wedding knot on 23 October 1993. The couple's wedding ceremony was held in Block Island, Rodhe Island, at the West Side Church.

Well, the couple first met while they both were serving at WTIC-TV. They soon started dating, and the rest is history.

Together, the former lovebirds share two kids, two daughters from their nuptial life. Emilie Hoffer is their first child, born in 1996 while second baby girl Carlie Hoffer in 1998.

Now, the Elder daughter, aged 23, graduated from The Johns Hopkins University. Meanwhile, a younger baby girl aged 21, attended Dartmouth College. Both of the kids are very close to their mother.

Divorced After 22 Years Of Marriage

Well, the couple enjoyed their matrimonial life for 22 years until finalizing their divorce. Hoffer and Brzezinski's officially divorced in 2016.

They separated after Hoffer accused Mika of having an extramarital affair between Brzezinski and her co-host, Joe. After the separation with Mika, James Patrick has not yet returned to the altar for another chance at love.

What is Mika Brzezinski's Net Worth and Salary?

Mika Brzezinski is an American journalist who has a net worth of $20 Million as of 2019. Like her, Maureen Blumhardt and Kathy Orr also have a similar net value. Through her long career, she has accrued this hefty amount as a journalist for working nearly 30 years.

Brzezinski further appears on the MSNBC early morning weekday news program "Morning Joe" with an annual salary of about $8 million.

On the other hand, her husband Joe Scarborough is also one of the high paid hosts in the United States. Joe's staggering net worth is reported to be $25 million as of 2019. The  Atlanta native’s annual salary is $8 million from show Morning Joe.

Apart, the couple now lives a lavish life in the 3story Bronxville house in New York. Their house worth around $2.1 Million.

The blonde television personality started her career at ABC’s "World News This Morning" in 1990. After working for a year, she shifted to Fox-owned Hartford, Connecticut affiliate.

The journalist further relocated to CBS in 2001 and was actually reporting on September 11, 2001, for that network from Ground Zero. She then moved back to MSNBC in 2007 and since then has been with the network and with Joe Scarborough.