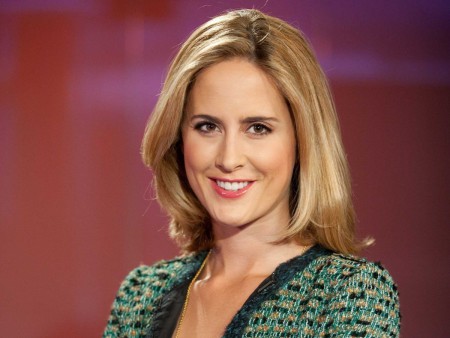 Olivia Sterns is a freelance journalist who worked as a Business and Technology Correspondent for NBC News and MSNBC. Also, Olivia is a former general assignment reporter for Bloomberg, where she spent five years. As of now, she is the co-founder of the Heartland Summit.

At Bloomberg, Sterns mainly covered the topic of business, economics, and finance. Further, she previously worked at CNN International, ABC News, and The Institute for State Effectiveness.

The freelance reporter is married to the Walmart heir, Tom Walton. He is the grandson of Sam Walton, one of the wealthiest and most successful American businessmen. It seems that the couple tied their wedding knot secretly in a private ceremony. The information regarding their wedding date and venue is a complete mystery.

Olivia and Tom might have begun dating around early 2016. From their marriage, the couple doesn't share any kids. To date, Walton and his wife, Sterns are still together. They are happy with their married life without any issues.

Further, Olivia was rumored to have dated David Gura, who currently works as an anchor and correspondent for MSNBC.

Tom Walton is the grandson of Sam Walton and Helen Robson. Sam was an American businessman and entrepreneur best known for founding the multinational retail corporation, Walmart, and Sam's club. For a certain time, Sam was the richest man in America.

Tom currently works as the managing principal of RopeSwing, a Bentonville, Arkansas-based hospitality company dedicated to creating unique culinary, entertainment, and cultural events. Besides, Tom is a board member and the regional program committee chair for the Walton Family Foundation.

Tom's family business had grown to an empire, and as per Forbes, Walmart's market capital value is over $296 Billion as of 2019. Walmart operates through three business segments which are Walmart U.S, Walmart International, and Sam's Club.

As a former reporter of NBC News and MSNBC, Olivia Sterns earned an average annual salary of around $56,453. She has an estimated net worth of over $1 million as of 2019. CNBC's general assignment reporter, Meg Tirrell, also has a similar wealth, whereas Courtney Reagan, a retail reporter at CNBC, is higher in prosperity.

Further, Sterns is married to her husband, Tom Walton, and he is the heir of Walmart, which is the world's biggest retail corporation. Therefore, Sterns enjoys a luxury lifestyle with her spouse. Besides, the couple now works for the Walmart Family Foundation, where they organize charity programs and give millions of donations for community welfare.

Olivia, as a journalist, has gained extensive knowledge and experience. She spent five years at Bloomberg TV network as a news reporter where her yearly pay was over $100,000.

Olivia Walton, along with her husband, Tom organizes several charity organizations and campaigns. Olivia is the co-founder of the Heartland Summit, a Walton Family Foundation event.

As an avid traveler, Sterns has traveled to more than 75 countries. Her info, such as family background and birth details are still a topic of mystery.

As being a part of the famous Walton family she has decided to give some of her experience to them. After enjoying her journalism career she is now the co-founder of the Heartland Summit which is the Walton Family Foundation event aimed at kick-starting economic growth in the Heartland.

Currently, she serves on the board of Crystal Bridges Museum of American Art and is the Chairperson for the Momentary which is opening on February 2020 in downtown Bentonville, Arkansas. Additionally, she is also on the board of Thaden School.